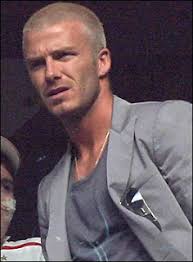 The appetite of a certain section of the media, for bashing David Beckham and his hair, shows no signs of abating anytime soon.

A Life In The Spotlight

From a very young age, David Beckham was marked out for special attention. As a junior schoolboy, his prodigious talents as a footballer had already caught the eye of a number of the country’s biggest clubs. Before he was in his teens he joined the set up at Old Trafford, home of Manchester United, the richest football club in the world at that time. United had sent in their biggest gun to make a personal approach to the young boy and secure the deal, in the shape of none other than legendary manager Alex Ferguson (before the knighthood).

It would have easily gone to the head of most boys. But several years later he burst, still in his teens, into the United first team and was still the humble, rather shy, and far from eloquent lad that had spent his formative years in the granite tough east end of London.

Initially in the UK, but then further afield, Beckham’s exploits on the field began to attract serious attention. Then there was the film star looks, then the globally famous pop star wife. He would become one the Galactico’s, that assembly of the world’s very best players who came together at Real Madrid and captain his country in one of the most remarkable football careers enjoyed by any Englishman. Off the field that success was mirrored with a happy marriage, several children and lots and lots of tattoos.

The Worm That Turned

But such is the British media, or a section of it, that this seemingly flawless idol has endured serial attacks over the years. For haircuts, or clothing choices, or those tattoos… or just about anything they can think of.

Recent weeks have seen a veritable splurge of hair loss stories, rumours that David has had a transplant, or is using spray-on hair. The Sun, market leaders at this sort of thing, went so far as to run a huge article around the theory that he is having a mid-life crisis based on some pretty thin evidence – mostly around the apparent improvement to his hair.

He may well have had something done to improve the appearance of his hair and he has definitely bought a motorbike. It hardly amounts to a crisis in the life of an extremely wealthy and very young 43 year old. His looks, and in particular his hair, have been an important part of his global appeal so it makes sense to take steps to retain them, while a motorbike strikes us as a great way to travel around Miami. Especially a fast one.

Hopefully one day, when the time comes, he will take the decision to go for scalp micropigmentation… in which case he will surely find his way to the doors of the inventors and world-leading provider, HIS Hair Clinic.

Previous Post
SMP Into Unshaved Head
Next Post
Just How Far Off Is A Hair Loss Cure?