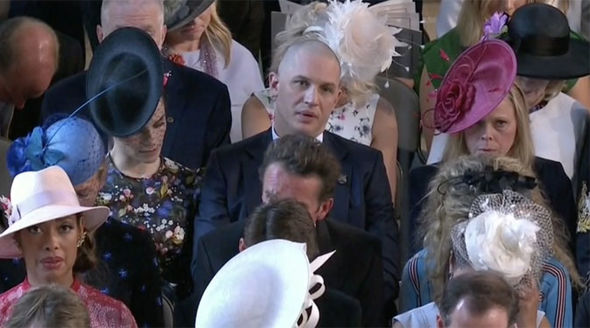 One British newspaper managed to upset the team at HIS HQ as their bald obsession infected their coverage of the Royal wedding.

A fair portion of the globe tuned in to watch the marriage of Prince Harry, sixth or so in line to the British throne and younger brother of Prince William who will inherit the crown on the passing of his father… though his father has been kept waiting for his turn by the Queen who is now in her nineties.

Prince Harry has been an extremely popular member of the royal family, he was always  on solid ground with the public who watched him as a very small boy be made to walk behind the coffin of his mother. He grew up, somehow, with a touch of the everyman about him, incredibly difficult to achieve for a royal – the evidence of his uncles shows just how hard. Uncle Edward always managed to look like a very posh fish out of water in just about any situation. Uncle Andrew has spent the last few decades swanning around the world like an old fashioned playboy. Harry on the other hand spent his time in the army and came out a passionate supporter of his injured comrades working tirelessly to raise their profile and cash for their support.

A Very New Sort Of Princess

The high regard he was held in by the public was only enhanced when he announced his engagement. There is no doubt the Brits love a royal wedding, but this one was destined to be special from the outset. The Prince was to marry an American divorcee, with echoes of an ancestor who was forced to abdicate the throne when he made the same choice. Not just any American divorcee either, this one was a TV star with mixed racial heritage. The reaction of everyone, from his family to the public, was overwhelmingly positive… though we would love to have been in the roou om for his Grandfathers reaction to the news.

The Daily Express is not the Times, it’s not where you go for deeply informed opinion on anything. It’s a tabloid. But while the other tabloids were content to gush about the endless delights of the day the Express found another angle.

Tom Hardy, a friend of Prince Harry, attended with his wife. We do not know what film Mr Hardy is currently working on but clearly the role has required him to shave his head. To the HIS HQ team he looked his usual sharp self, smart suit, beautiful wife on his arm, every inch the royal wedding guest.

The Express ran a large article that centred around, of all things on the day, his bald appearance. We were offered the tweeted comments of upset fans… “Sod the royal wedding, why is Tom Hardy bald!?” Readers were treated to a series of pictures of Tom’s new bald look from several angles and in different lighting conditions, presumably to reflect their shock and to invite readers to feel the same.

We are pretty sure that Tom Hardy will be completely unruffled by the attention… it’s not the first time he has shaved his head for a role and so not the first time he has been subjected to this sort of attention. But for it to make the pages on the day of the royal wedding when there were a million photo opportunities is just sad…Oprah and George Clooney were both in attendance.

Whenever we see this type of article we are always conscious of how many young men, really struggling to come to terms with their hair loss, will read and process it to reinforce their already negative feelings. Surely it is time for the British media to grow up in this regard.

Previous Post
UK Woman Credits Shampoo As Her Alopecia Cure
Next Post
What Is The Pattern In Balding?