Comedian Rob Brydon is another famous face who appears to have had a bit of re-thatching carried out on his rooftop.

He was clearly experiencing some hair recession as shown in the photo below, however it would now appear that his hairline has been significantly reconstructed. Therefore, the Rob Brydon hair transplant rumours are most likely true.

The Welshman hasn’t explicitly confirmed that he’s had a hair transplant, but did say:

“For some time now my head has been feeling a lot warmer but I was unable to put my finger on the reason why.” 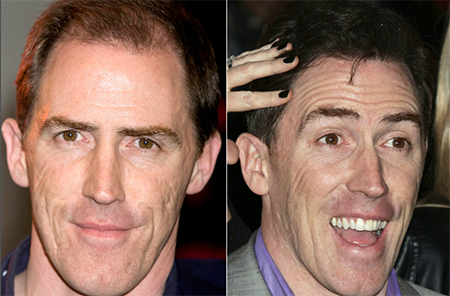