Justin Bieber apparently shaved his head on Jimmy Kimmel’s hit talk show, whilst millions of female fans around the world watched in horror.

Teen superstar Justin Bieber seemed to have had his head shaved by Jimmy Kimmel himself on live TV, but it turns out it was all for a sketch. Justin Bieber was actually just wearing a bald cap, so his famous hairstyle lives to fight another day. 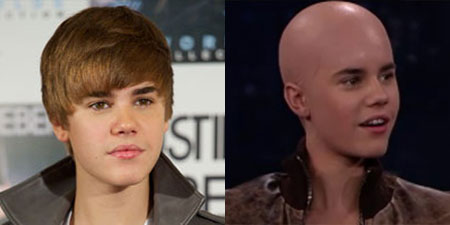 Jimmy Kimmel revealed he ran a Twitter competition for fans on Twitter. The purpose of the competition was for fans to suggest the title of a duet between him and the One Time star. One suggestion was Jimmy Cuts Justin’s Hair and Jimmy said: “I was thinking instead of us singing the song it would be fun if I actually did cut your hair.”

On the show, Jimmy Kimmel stood behind Justin holding a pair of scissors, and Justin yelped: “Did you actually take some off?!”. The pair then decided it would be more fun to shave Justin’s entire head.