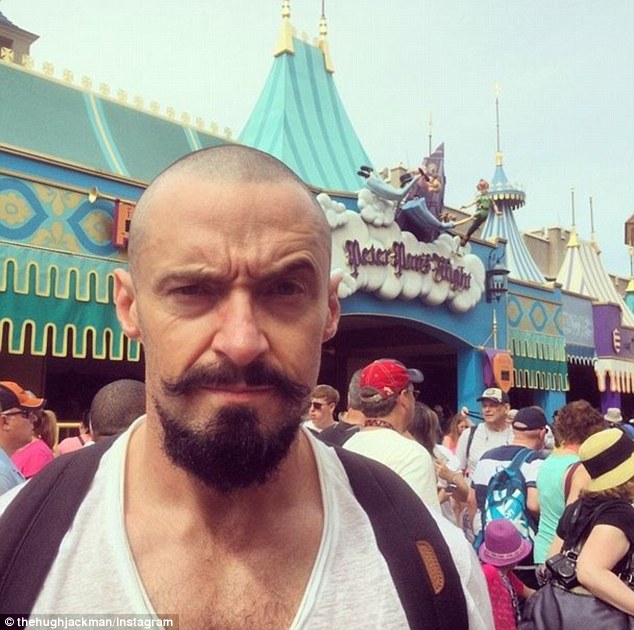 Does his new movie and new haircut spark new questions regarding the Aussie’s hair loss?

In another nominee for the worst hair cut decision, Hugh Jackman sports a dodgy looking mullet hair style in his new movie Chappie, an underwhelming movie about a robot with feelings (we liked it better the first time we saw it in 1986 when it was called Short Circuit). But perhaps what’s the most interesting thing this reveals, beyond Jackman’s more decision ability when picking movie roles, is his hairline.
The unfortunate haircut highlights what appears to be a drastically receding hairline. Rumors have swirled for years that the jacked Australian actor has worn some sort of hair system. Over the years, Jackman’s hair has (literally) been all over the place. From the various forms of the cartoonish hairstyle he sported in all the X-Men and Wolverine movies, to the buzzcut mess he sported in the big screen adaptation of the classic play Les Miserable, to the shaved bald look he’ll rock for the upcoming Peter Pan movie “Pan.”
Perhaps the ever changing hairstyles has caused some of the hair follicles to get over worked and now some of them refuse to come out and play.
Whatever the case may be, we think most of us can agree that bald Hugh Jackman is pretty badass looking. The photo of a bald Hugh Jackman at the Wimbledon tennis championships really carries a striking image. The handlebar mustache and with the natural looking receded hairline on full display here, Jackman’s look is at the apex of alpha male style.
This should be inspiration to those who are struggling with hair loss and holding on to the few fibers they have left. Jackman’s shaved look provides such a great example of how masculine and strong the shaved look can be. Pair the liberating feeling of shaving the head with the magic of SMP and you’ll have a look that you can boldly go forth with.
The handlebar mustache is purely optional — all though, it may be the perfect finishing touch.