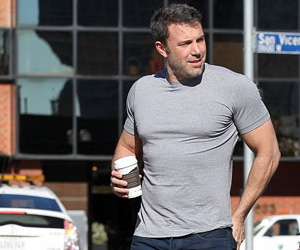 One of the great Hollywood hair loss debates have surrounded this Boston born film star. Did he switch out the hair piece for a mask and cape? Or like Bruce Wayne’s secret identity, will we ever know for sure?

Speculation and rumors about the award wining actor/writer/producer/director Ben Affleck wearing a hair piece have been circulating around Hollywood for years. Gossip columns and celebrity hair loss blogs have all suspected that Bostonian super star has worn some sort of hair system for quite some time. We’ll be honest — we’re not entirely sure either. The ‘does he, does he not’ discussion has happened a couple of times around the HIS Hair offices. Whatever the case may be, he doesn’t always make a strong case for himself with ever-evolving hair line. Sometimes it’s there, sometimes it’s a bit receded. It seems like it has it a mind of it’s own — it shows up when it feels like it.
Recent photos from events over the past few months show a thicker, fuller looking head of hair than that which was sported several years ago.
Here in January of this year, a buffed up Affleck grabs some coffee in the yuppie Los Angeles neighborhood of Brentwood. Affleck, set to take on the role as Batman, looks to have a natural looking hairline, consistent with that of man in his early 40s.
But here is one taken right around the time The Town came out in 2010. Definitely sporting the same hairstyle he was in the movie. The hairline looks similar to the one in the photo above, but as you can see, he’s beginning to experience some hair loss in the back of the scalp. That would be evidence of him not wearing a hair piece — or at least not on the day that this photo was taken.

And here’s one of a much younger Ben Affleck to give you an idea of where the hairline started.

And here’s one from 2013. If you look closely, one can see that Mr. Affleck is executing a modified version of the ‘comb-over’ doing more of ‘comb-forward’ for his side peaks and temple areas. If nothing else, our new Batman is resourceful.

As some of the earlier photos would suggest, Affleck doesn’t appear to be wearing any sort of hair system now a days. Perhaps he never did. Photos from over the years can make the argument that he was just one of the lucky ones who was able to maintain his youthful hairline for such a long time (Affleck turns 43 later this year). And when the hair line did begin to recede, he was able to hide it with a specific styling method.
Perhaps he’s come to a point where he can’t hide it anymore and is embracing the receded look. Maybe being crowned Batman gives you the confidence to face the world boldly. Either way, it looks like Affleck has been able to fight the good fight for little bit longer than most guys his age. Chalk it up to good luck.
But let’s not end the debate there. What do you think? Agree? Disagree? Let us know.