What is Nisim Shampoo? 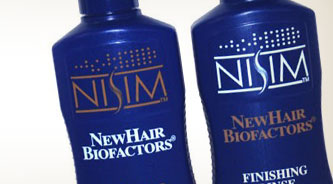 Nisim Shampoo, alongside the rest of the New Hair Biofactors range, is manufactured by NISIM and distributed by TRAChealth, based in New York, United States.

The Nisim range has actually existed for nearly 20 years, and given their claim of being “the only non-prescription all-natural product to undergo scalp biopsy studies”, we thought this product was worth a mention.

A clinical study was published in the US Medical Post on August 24th 1993. 148 participants with varying degrees of male pattern baldness participated in an open-ended study to determine the effects of hair regrowth, during the use of New Hair Biofactors products.

The results indicate that 85.7% of the men in the study had an increase in hair density within the sample patch of 30% or greater. Very impressive results to say the least, if they are to be believed.

How is Nisim used?

The Nisim product range consists of a hair loss shampoo, an extract lotion (used in the same way as Rogaine lotion) and a range of conditioners specific to a variety of hair types. TRAChealth state that use of the conditioners is optional, however the combined use of the shampoo and extract lotion is obviously recommended by the manufacturer.

The Nisim shampoo can also be used to treat psoriasis, dandruff, an itchy scalp and even cradle cap.

The promotional video is shown below: