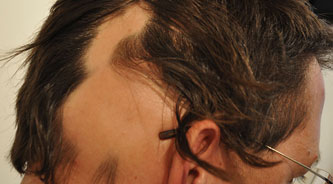 Hair loss is a situation that many men deal with on a daily basis. Trying to find a good remedy to address their condition can sometimes be confusing for a beginner. There are just too many available in the market today, all promising to be effective. Note that balding can occur in different ways and there is no particular remedy that can address its various types. An exception however can be found in scalp micropigmentation.

Dean has had alopecia areata for about two years now. It is a type of hair loss condition that causes bald spots to appear randomly throughout the scalp. Unlike male pattern baldness, it does not appear in a particular sequence. The sporadic way it manifests itself can cause a lot of anxiety and may even be exacerbated should it progress to alopecia totalis or the total loss of hair upon the scalp.
He noticed his condition worsen for a few months until it suddenly stopped. The bald patches remained however and decided to seek treatment for it. Luckily, Dean found HIS Hair Clinic and our scalp micropigmentation technique. He not only wanted to address his alopecia areata but was open to find a way to have a better hairline as well. Dark and natural looking was the type of hair pattern he expected to see. There was some concern about the procedure being painful but this soon disappeared once it was underway. He even mentioned that it was just like going to the hairdresser, which probably meant that it felt quite normal after the first session. His description stated that he felt something going into the skin though it was nothing that he could not deal with.
Dean was able to feel more relaxed as the treatment went on. It took two main sessions and another two touch-up procedures to complete the process. He was glad that the practitioner who handled his scalp was quite accommodating and helpful throughout the treatment. Seeing the results made him feel quite happy and satisfied that he decided to get scalp micropigmentation. His two year ordeal was finally resolved and he no longer had to feel self-conscious out in public.
Maintaining his treatment only requires that he wash his scalp daily and apply a good moisturiser. Dean was even thinking of putting on an anti-shine product for a matte effect. He uses a clipper every couple of days instead of completely shaving off his existing hair to have the slightest stubble on the surface.
The main thing Dean received from winning his fight against alopecia areata is his confidence. He says that he still felt a bit unsure after his first session. No one at work noticed that he received treatment however. They only complemented him on his new hairstyle. This felt good because people actually mistook the pigments for real hair. His confidence was surging after his second treatment, assured that he need not worry about his appearance any longer. Dean shares that it is better to just drop in for a consultation instead of researching for months like he did on scalp micropigmentation. It is understandable to be hesitant though he swears that he was so glad that he finally made the decision to visit a clinic.