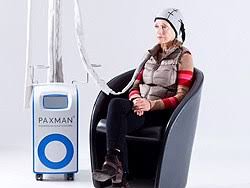 We have written several times about the impact these scalp cooling devices have made since hitting the market. Now we share one woman’s delightful account of her experience.

The idea was a relatively simple one. That by reducing blood flow to the scalp during chemotherapy, it might be possible to reduce exposure to the harsh chemicals used during the treatment. These chemicals specifically target any fast-growing cell in the body, and unfortunately hair cells are among the fastest.

So caps were developed, to be fitted before, during and after treatment. They proved efficacious enough to be given medical approval but even ahead of that were appearing in hospitals around the world.

We wrote about the caps extensively, they filled a vital gap in the market as there was no current offering for anyone going through chemo that offered them any hope of holding onto their hair. That bald appearance stigmatized the patient and many find the experience extremely distressing… a significant proportion of women actually decline the treatment on that basis alone. A statistic that is as tragic as it is shocking.

Victoria is a well-known face to millions of UK television viewers where she hosts a daily morning show that carries her name. When she received a diagnosis and found herself headed for chemotherapy she elected to share the experience with her audience. The process, for her, included a scalp cooling cap which she spoke about at length, and of her optimism about the chances of keeping her hair.

Unfortunately for Victoria, the cap did not do the trick in her case and she resorted to wearing a wig.

We had not lost faith in the caps, but realised that Victoria’s experience would have seen judgement drawn by many of her viewers.

So we were delighted to find the account by Tracy Savage, a UK mum from the north-west. Tracy was diagnosed with stage 2 ovarian cancer and had been shocked to learn hair loss was in her prognosis. In her own words “… There was no way I was going to lose my long hair without a fight.”

She researched and discovered the Paxman cooling cap. A decision she looks back on with delight as she managed to keep most of her hair. She told the local press at Warrington Worldwide “I didn’t want to be seen as a cancer victim, especially in front of my children.”

It is such a simple and easily understood sentiment and outlines why the cooling cap is such an important adjunct to chemotherapy treatment. We’re delighted to share Tracy’s story.

If you would like to discuss your hair loss situation with one of our team of friendly experts simply complete the contact form at the side of this page, or click here for your nearest clinic.