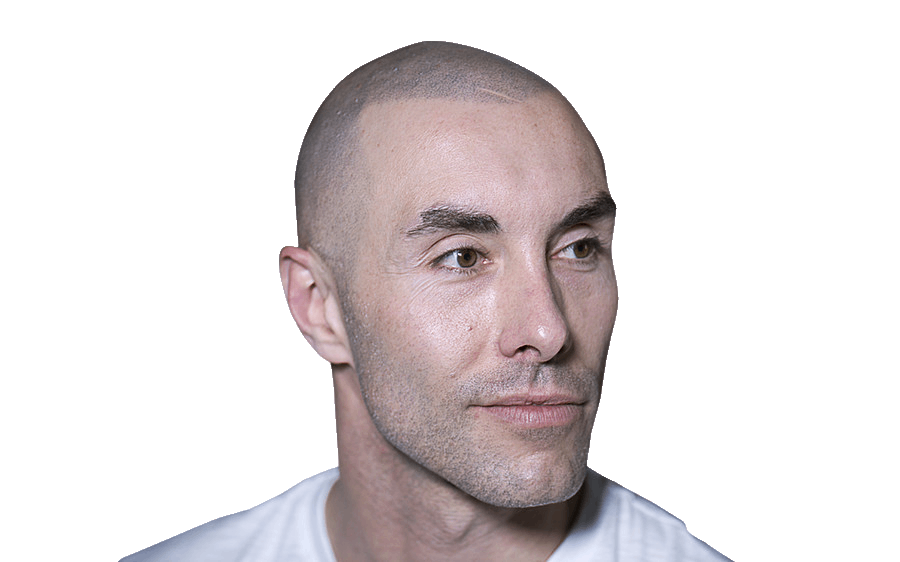 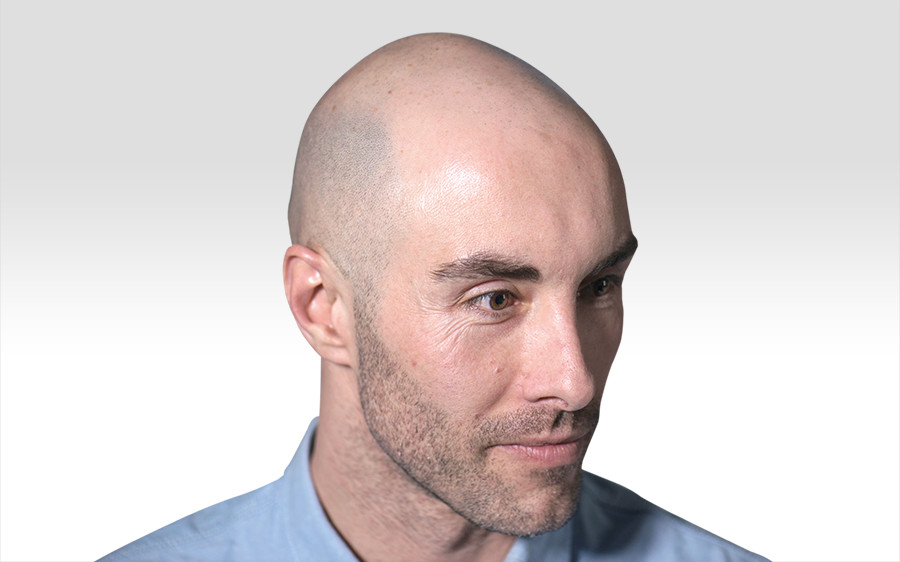 SMP stands for Scalp Micro Pigmentation. It is a method of depositing pigment into the dermal layer of the skin on the scalp, which replicates hair follicles. When viewed from a few inches or further away, the pigment dots appear as hair follicles and the client has the appearance of a full head of recently shaved hair. SMP is color matched on a gray scale for most clients and can be used to treat clients of very pale complexion to extremely dark skin tones. Pigment changes also allow HIS to treat clients with red hair, blonde hair or older clients who have much gray or white hair. Normally, SMP is applied over the course of two to five treatments, at one of our clinics, with each treatment lasting 15 minutes to four hours depending upon prior hair loss.

A typical scalp hair from a normal caucasian male is about 77 micrometers in diameter (67 Um in those of Asian descent, and 120 Um in those of African descent). Typically, SMP dots placed in the dermis are 90 to 150 micrometers in diameter. This might seem a bit larger than a real human hair, but when viewed from six inches or further away, the size is indistinguishable from real hair follicles. Often, even close family members standing one foot away (0.3 meters) cannot tell where your real hair ends and the SMP begins.

Can SMP be used to disguise hair transplant scars?

Yes. SMP® can help significantly in reducing the visibility of scars from previous hair transplant surgery. The degree of scar camouflage does depend on the fibrous tissue itself. However, by blending the scar with surrounding hair it becomes much harder to spot, almost unnoticeable in the majority of cases. Photos of some of our previous clients who have undergone SMP® to help disguise scars are available on the Gallery section of our website. (www.hishairclinic.co.uk).

How long will MHT last for?

With proper care and treatment, including using high sunscreen when outside, SMP will commonly last for many years. In a healthy client with a normal immune system, we expect that a full series of SMP treatments will last eight to fifteen years before needing a touch-up. In certain clients who have strong immune systems or who work in outside sun constantly, the treatment may need to be touched up sooner. Because every individual is unique this is not a question that has a definitive answer. Fortunately, if a touch-up is needed, a fee is charged which is cheaper per hour than the normal full treatment fee.

What pigments or inks are used in an SMP treatment?

Most of our pigments use combinations of metal oxides to replicate the gray scale needed for the majority of our clients. In certain cases where the clients have very fair or red hair, beta carotene additives are also used. We would like to disclose more information about our pigments but HIS has spent several years perfecting the SMP treatment and we do not wish to disclose any proprietary secrets to competitors or imitators.

Will SMP fade, smear or turn blue as the years pass?

In healthy individuals, we believe the chances are minimized. Any pigment applied to the dermal layer of the skin will eventually fade, but we expect SMP to last several years or more, before even minimal fading is noticed. Fading is much more prevalent in situations where regular tattoo inks are used to try and replicate SMP. Ultraviolet radiation from the sun often breaks apart some tattoo inks for easier absorption by the body resulting in increased fade rates and slight smearing. And, as the inks are degraded, their chromophores are often altered resulting in changed color. Without revealing too many of our trade secrets, we feel that the particular molecular structure of the SMP pigments we use, along with their deposition in the upper layer of the dermis provide the best chance for a long lasting and stable treatment.

Yes. SMP pigmentation can be removed with an electro-optic Q switched laser, which is used to heat and break-up the SMP pigmentation for easier absorption by phagocytes in the dermis. SMP is fairly easy to remove in most cases because the pigment is not deposited as deeply as normal tattoo ink. The electro-optic laser however, is very expensive and therefore, many clinics which advertise laser removal do not actually own one. HIS does now do removal of SMP at one of our clinics and may expand this option in future years. We can say that with the feedback received so far, the amount of clients wishing for true SMP reversal or total removal is less than one percent (< 1%).

How much does SMP cost?

It depends upon the thinning or balding pattern, the area of the scalp to be covered and if any scars are present. The price range for SMP is normally 500 to 3000 British pounds (or $800 to $4800 US dollars) excluding any application of SMP to scars. The lower price range is for Norwood I or II level clients who need simple alterations to their hairline or small areas of density added. The higher end of the price range is for Norwood VI and VII clients who have little real hair remaining. Scars are more difficult to predict as regards pricing and can vary depending upon a case by case basis.

How can I tell roughly how much SMP pigmentation I will require?

In most cases you can compare your hair loss to the well known Hamilton-Norwood scale for male pattern baldness. This scale is rate from level one up to increasing baldness at level 7. Typically, most male clients we treat will ask for enough SMP scalp coverage to bring them back down to a Norwood I or II level of appearance.

Who developed SMP and why?

The SMP process was developed by Ian Watson and Ranbir Rai-Watson. Ian Watson suffered alopecia after the sudden death of his brother from cancer and worked to develop a method of replicating hair follicles that was both realistic and low maintenance. Working with Ranbir, the widow of his brother, they initially experimented and then perfected the technique that is now standard HIS practice.

What client has had SMP the longest?

Ian Watson, the Co-Director of HIS received SMP in 2001. He is the client with the oldest SMP and continues to proudly display his appearance as he manages clinics across the globe.

Can I speak or meet with clients who have finished their SMP treatments?

Yes, we encourage it! Understandably, many clients cannot make a decision based upon photo evidence alone, and for them, they need to see SMP up close and in person. That is why we encourage any potential client to drop by on of our clinics if they have the opportunity. Our forums also contain a section that is setup to help potential clients meet former clients who have completed the treatments. Many of these past clients will even give out their phone numbers and email addresses so that any potential client can converse with them privately outside any HIS moderated forum.

Will I need the consent of my parents or guardians?

It depends on where you live. In the UK and the United States, all clients under the age of 18 must have the consent of a parent or guardian before we will agree to treat them. In other countries the local laws will apply. We are happy to treat young adults if we feel it would be in their best interests and if consent is obtained. In fact we treat many young people, especially those who are suffering with alopecia or other similar medical conditions.

Contact us today to arrange a free consultation and one of our UK clinics. We can also offer digital or remote consultations via Zoom, Facetime or WhatsApp video.

Download our brochure to read more about our SMP® treatments.

Download Brochure
Menu
We use cookies on our website to give you the most relevant experience by remembering your preferences and repeat visits. By clicking “Accept All”, you consent to the use of ALL the cookies. However, you may visit "Cookie Settings" to provide a controlled consent.
Cookie SettingsAccept All
Manage consent