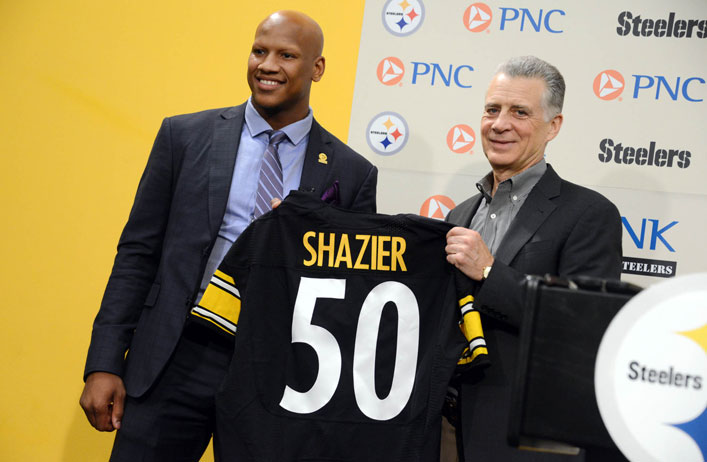 Former All American and first round pic Ryan Shazier is a long time sufferer of alopecia areata, but he never let it sack his confidence.

Earlier this year, All American Ohio State linebacker Ryan Shazier entered the NFL draft ending his college career as one the top linebacker prospects in the nation. Drafted in the first round by the Pittsburgh Steelers this past spring, Shazier is making major strides toward being one the top defensive rookies in the game this upcoming fall.

But beyond the All American status, all the stats, accolades, and achievements, one of the more interesting things about Shazier is that he has been a long time sufferer of alopecia areata, an autoimmune disease of the skin that causes hair loss on the scalp and body.

At 5 years old, Shazier’s mother noticed his hair beginning to thin and start falling out in clumps. Shazier, now 21, said in an interview with The Columbus Dispatch, “A lot of people think I’m just bald. It probably bothered me when I was younger. I was only 5 years old, the only bald kid in kindergarten.”

It should come as no surprise that Shazier was subject to teasing and name-calling for most of his life.

However, Shazier found support his parents growing up and dealing with his alopecia. “My message is always to act like a champion,” Vernon said. With encouragement and guidance from his parents, Shazier was able to brush aside the taunts and insults, and move forward with his life.

Shazier eventually found his way to the football field and began to find success in athletics. And as he found more success, the less he heard the teasing.

It was that reputation that lead to college coaches to come calling from all over the country: Alabama, Florida, Florida St., Michigan, Oklahoma, and USC to name a few. Shazier, a Florida native, originally verbally committed to the University of Florida, but then change his destination to Ohio State after Urban Meyer (who recruited Shazier to Florida) found his way up north.

At Ohio State, Shazier would go on to have an illustrious career that would see Shazier lead the team in tackles by 55 more tackles than the next best player on the defense, find himself third in the nation for tackles for a loss, and feature him on a defense responsible for a 24 game winning streak, a program record. Not to mention a slew of Play of the Week awards, a spot on the finalist list for the The Butkus Award (college football’s award for the nation’s best linebacker), and of course, named a consensus first team All American at his position.

While not known for being the biggest of linebackers (Shazier clocks in at 6’2”, 222 lbs. – on the smaller side for a college and professional linebackers), Shazier’ success as a player would be built on his hard-nosed style and toughness. That toughness displayed on the gridiron, no doubt, can be attributed in part to growing up with alopecia.

“I love being bald,” he said. “It saves me on haircuts and everything. It seems like people love it.”