Rihanna, known for her ever-changing hair color, has taken the plunge and gone blonde. 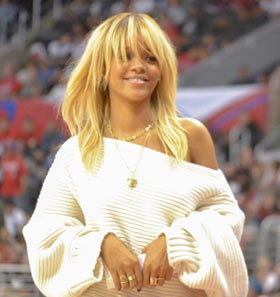 The “We Found Love” singer is sporting long, sleek blonde locks for her appearance on the cover of Elle magazine.

A candid shot of the singer reveals long, bushy hair that may remind some of Tina Turner’s popular ‘do. RiRi appears topless to have been topless when the shot was taken, is wearing layers of gold jewelry.

Rihanna’s hairstyles have evolved throughout the years, from the long wavy locks that were featured in her music video for her smash hit song, “Pon de Replay.” RiRi’s hairstyles have included bobs in a variety of colors, usually black, pink, or red