The Aussie singer, and ex-neighbours star, is the latest celebrity to own up to undergoing a hair transplant procedure four years ago.

The 43-year-old told Piers Morgan he had ‘done a Rooney’ whilst being grilled in an interview for Piers Morgan’s Life Stories. 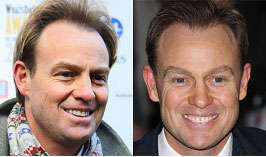 Since Wayne Rooney publicly told the world about his hair transplant surgery last year, the stigma associated has been lessened for other men.

Donovan said: “It’s something I did just for myself and haven’t ever felt the need to publicise it.”
Manchester United striker Wayne Rooney had a follicular transfer in which hairs are moved from donor areas – usually at the back of the head – and then replanted in bald areas.

Actor James Nesbitt has also had the same treatment, as did former Dancing On Ice judge Jason Gardiner.

Although HIS specialises in scalp-pigmentation as opposed to hair-transplant surgery, we think it is a positive sign that hair loss solutions are being addressed and becoming less chastised.

Donovan is set to headline a 80s revival concert in London’s Hyde Park on 11 July, at this rate he may even be able to revive his 80s mullet.