Footballers and their hair transplants

Whether its making sure they’re wearing their lucky pants, tapping ‘This is Anfield’ sign on the way through the tunnel, or waiting to come out until they are the last one on the pitch, footballers are notorious for strange rituals to help boost their ability and confidence.

But recently we have seen a new more hair raising issue affecting our footballers and their confidence. For in-the-spotlight-strikers Torres and Rooney, perfecting their Barnet seems to have made all the difference. 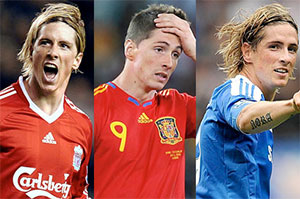 Just one year ago Wayne Rooney was hitting the headlines for all the wrong reasons; sex scandals, speculation for his future at the red side of Manchester and the serious slump in scoring goals. The balding star was slating by the critics with many believing he was past his peak and the spiral of poor form continued with a total tally of 11 goals for the season.

Fast-forward to post Rooney-hair-transplant-gate and we see a different footballer on the pitch. Aside from the improved hair-line we see a striker who makes hitting the back of the net look easy. With 9 goals already including two hat-tricks, Rooney looks set to be a contender for the golden boot to go along with his golden locks.

Fernando Torres was once a hero at Liverpool, the kop would sing his praises and his song, almost claiming he was a scouse, but that all changed when the number nine decided to take a trip to the hairdressers.

His arm-band may have said he was a red, but his lacklustre performance on the pitch certainly didn’t. The Spaniard spent most of his time dubiously getting free kicks and miss-firing shots causing his cheeks to turn the same colour as his shirt. The World Cup was a similar story as he was sidelined for the latter games, not scoring a single goal.

His ridiculous price-tag put more pressure on the striker as he made the trip from Liverpool to London swapping colours en route. His performance and mood stayed Blue as he looked awkward against his former club beginning yet another goal drought. His miss of the millennium against Manchester United and two-footed straight-red tackle left Abramovich wondering why he had spent so much for so little.

But now Torres’s blonde bob hair has returned, Alice band and all, his confidence has grown too. He is more aware and alert, making runs and superb passes, being in the right place at the right time, looking like the Torres we all once knew. His goal scoring tally is slowly creeping up and the only difference is the length of his hair.

Ryan Giggs has reportedly had £30,000 hair treatment and he has played consistently since the mid-nineties! Wesley Sneijder is said to have recently visited a Hair Transplant clinic and is said to be very happy with the results
Above all, their hair has begun to grow again and, with it, like Wayne Rooney after his Harley Street transplant, their confidence has been restored.

Previous Post
How to cope with Alopecia
Next Post
Fat could be the answer to hair loss!