What is the Hair Stimulating Complex (HSC)?

Hair Stimulating Complex, often referred to as HSC, was developed by Histogen, a pharmaceutical company based in California

The product itself is a liquid formula, designed to be injected into the scalp as a remedy for hair loss. The formula has undergone medical trials and is still ongoing. Results look promising, however there has been some criticism and as yet, the solution is still being evaluated.

The liquid complex contains growth factors and proteins; such as follistatin, VEGF, and KGF; which are naturally secreted by embryonic cells. These growth factors are shown to stimulate resting hair follicles to grow new hairs and induce stem cells to form new follicles in the scalp. Histogen creates the Hair Stimulating Complex by culturing newborn cells in an environment that simulates the development environment of an embryo, one of suspension in which there is a very low amount of oxygen.

The trial showed efficacy of the formula at 12 weeks and 1 year. This includes statistically significant improvement in hair count, hair thickness, and hair density. According to Histogen, this finding represents the first time that a treatment of this type has shown significant growth of hair in testing in humans. There were no adverse events seen in the trial, including an evaluation after a two-year follow-up review following the initial trial. Results of this trial were published in the peer-reviewed Journal of Drugs in Dermatology in November 2011.

The next round of clinical trials, the Phase I/II trial of HSC is currently underway, with enrollment of 56 male patients who have male pattern hair loss. According to the CEO and Chairman of the Board of Histogen, Dr. Gail Naughton, the 12 week data on safety and efficacy of HSC were presented at the Society for Investigative Dermatology meeting on May 11, 2012. As per Dr. Naughton, the efficacy of HSC in increasing hair count was 46.5% above the initial pilot test at the same timepoint (12 weeks). In addition to improved hair count, there was statistically significant efficacy of HSC with regard to terminal hairs and hair thickness. There were no adverse events reported which were caused by the formula.

Below is an image from the clinical pilot trial showing effects of Hair Stimulating Complex (HSC) 1 year after a single treatment. 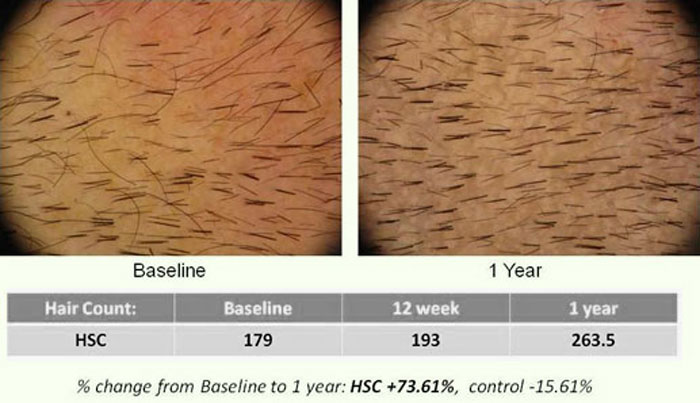 Could Histogen have found a real cure for hair loss?

Although the initial results look promising, their findings have come under fire from a number of sources. The main areas of concern seem to be as follows:

For more information about HSC, we suggest the following resources: