What is Propecia and does it actually work? 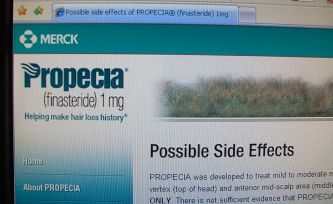 Propecia is the worlds most popular pill for the treatment of Male Pattern Baldness on the vertex (top of the head) and anterior (mid scalp area). Propecia is FDA approved and is widely used.

The drug claims to work effectively for a large proportion of men suffering from hair loss by slowing the shedding of hair and in a few cases, regenerating lost hair. Studies used to back this claim are based on men aged 18 to 41 with mild hair loss, however there is no evidence to suggest that propecia combats hair loss around the temple area.

Increased levels of DHT, one of many hormones found in the male body, is one of the factors blamed for hair loss. It is believed by many that DHT shrinks the hair follicle until it no longer produces visible hair. Testosterone is converted to DHT as part of a natural human process, however whilst DHT is important to development early in a mans life, as the person ages DHT in the body can reach excessive levels. Researchers have found that some men suffering from Male Pattern Baldness have increased levels of DHT in the balding areas of their scalps.

Human hair normally follows a cycle of growth, falling out, and new growth. But increased levels of DHT are believed to contribute to the shortening of the growth phase, and a shortening of the time it takes for the hair to fall out. This results in a thinning of the hair on the scalp.

How does Propecia work?

The active ingredient of Propecia is called Finasteride, which claims to block the formation of DHT in the male body. By reducing the production of DHT, the manufacturers claim that there is insufficient DHT remaining to cause significant shrinkage of the hair follicle, therefore enabling the follicle to produce and accommodate hair as normal.

As with many treatments that manipulate the production of hormones, there are several documented side effects that may be experienced. These include a reduced sex drive, erectile dysfunction and a reduction in semen production.

Given the fact that most hair loss sufferers are looking to improve confidence and self-esteem, these side effects could simply mean that one problem is replaced with another. It should be added however, that these side effects are rare, and are not experienced by the majority of users.

Propecia is for use by men only. Especially dangerous is the use of Propecia by pregnant women as Finasteride may cause abnormalities of the sex organs of a male baby.

How much does it cost?

Should a user stop taking Propecia, any positive effects will gradually disappear, meaning this drug must be taken for the lifetime of the individual. Ongoing use will cost approximately GBP £35 per month (around USD $57).

Previous Post
John Travolta, hair systems and hair loss concealers
Next Post
All you need to know about Rogaine