The Right Tattoo Can Help You Find Work 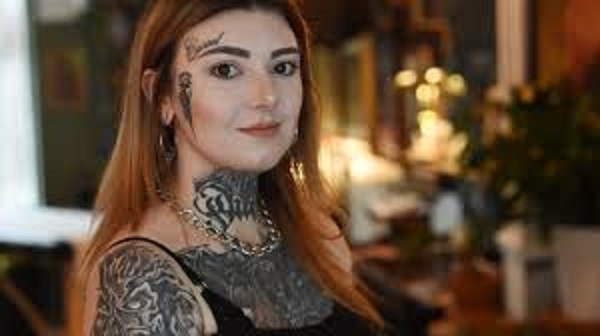 News from England that a young girl got a face tattoo to avoid “normal jobs” plays into old stereotypes about tattoos. We want to offer another perspective.

Kayleigh is a 26-year-old up and coming tattoo artist from Birmingham in the UK. Kayleigh got her first tattoo at the age of 18, her best friends surname on her ankle. Since then she has gone to have 60% of her body inked.

At the age of 24, she started her apprenticeship to become a tattoo artist herself. On her first day she had a tattoo put on her face, with the word “cursed” inked over her right eyebrow. It was, she said, an attempt to completely commit her to her new career. A determined effort to prevent her ever being able to apply for a regular job. She went on to have a rose on one side of her face, with leaves on the other side… to symbolize new beginnings.

Her story is redemptive, she is now a highly regarded artist with her boss describing her as one of the best junior artists he has ever seen. Possibly just as well given her limited options beyond her work in the studio.

Tattoos in the Workplace

There was a time when you could be confident that the tattooed man stood next to you was from a particular class or profession. Popular with maritime sorts, sailors and dockers for example. But turn up for a job interview in almost any other environment with visible tattoos and it was likely to be a short interview.

Tastes have changed with sportsmen notable leading the way and changing attitudes with bold statement tattoos. David Beckham sticks out as someone who many followed with angel wings adorning the back of his neck. But above the neck tattoos largely remain, for most, an aesthetic step too far… and one which most career advisors would counsel against.

The idea that a tattoo above the neckline might actually help you find work, any work, is a relatively new one. Since HIS Hair Clinic opened their doors in 2005 we have been using tattoo-type techniques to do just that. Returning clients to a more youthful hairline and adding the appearance of density to the remaining area affected by hair loss. We see clients who have, along with their hair, lost varying degrees of self-confidence, it is probably the single most common comment from prospective clients. With high quality $30K transplants beyond the scope of most, SMP is a wonderfully cost-effective method of regaining a hairline, and with it the self-confidence. And if there is one commodity that is required by a job candidate in an interview it is self-confidence.