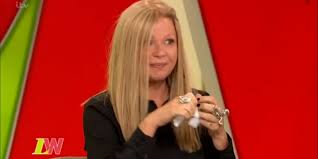 Gail Porter is one of our favourite hair loss heroes and in the past has shown plenty of capacity to surprise. Her latest stunt really caught us out…

Gail Porter – The Making Of A Hero

13 years ago Gail Porter was enjoying an enviable career in media as a UK TV personality. Her easy Scottish charm saw her land presenting jobs as a young girl fresh out of media college. She fronted shows including Top of the Pops and Live and Kicking, immersing herself into the trendy music set… her partner was the enigmatic Keith Flint, frontman and reported firestarter for The Prodigy, the successful British dance act. But in 2005 her life was changed forever by alopecia.  An image of her, naked with her back to camera and smiling over her shoulder, would become infamous when it was projected onto the Houses of Parliament building in London, England. It was part of a guerilla marketing campaign which Gail claims to have known nothing about until the following day.

Gail, from the moment of her diagnosis, chose not to run and hide under a wig. Instead she opted to stand up and talk about her problem on behalf of the thousands of poorly understood victims of the same illness who had no voice of their own… something for which we have always admired her.

She has also spoken out about her bipolar disorder, another super challenging condition that sufferers live with every day, yet continues to campaign for a number of charities to this day, including giving time to the Little Princess Charity, which provides young girls suffering from hair loss with wigs made from real hair donated by well-wishers.

On a recent episode of Loose Women, a UK daytime magazine show aimed at all women (not just loose ones), Gail shared that she had decided to be fitted for a wig. Last week she appeared on the show again to have the resulting wig fitted. Her emotional reaction to seeing herself with hair again was lovely to watch, she was initially overcome and some tears were shed… she worried about the reaction of her daughter briefly but decided she got used to her being bald, she would get used to her in a wig.

Gail has no intention of slowing down her campaigning and insists the wig will only be worn part-time, she has apparently got very used to being bald after all this time. Whatever she decides to do is fine by us, it would have been easy to have confused Gail with so many of the bimbos who get the sort of work she did when she was young. But Gail has gone on to prove she was so much more than that, she wrote an autobiography back in 2007 called “Laid Bare” – Maybe it’s time for an update?

Previous Post
How Does Smoking Affect Hair Loss
Next Post
Minoxidil, Hair Loss Drug Or Hair Of The Dog