For the past year, Sheena Hollis’ daughter Kendal has been growing her hair out for a special reason. 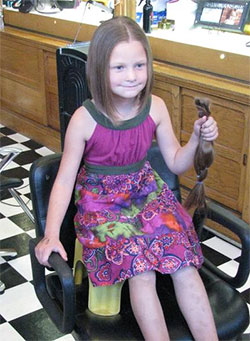 On Friday evening, Kendal got a haircut from Kelli Parks at The Parlor in El Dorado so she could donate her hair to Locks of Love, which uses hair donations to create wigs for those who lose their own hair to medical conditions.

“She saw a news special about little girls with alopecia [hair loss],” said Sheena. “One little girl’s greatest wish was to have hair.”

So Kendal decided to give hers.

“The people that don’t have hair, I wanted to let them have some hair,” said Kendal, who is 7.

Kendal’s hair was already long, but she decided to keep growing it out so she could donate it.

Because of her generosity, Kendal’s hair is about 11 inches shorter now.

“I thought it was pretty cool,” said Sheena. “She wanted to grow it out so the little girls on the news could have hair.”