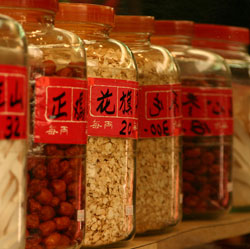 Many people have tried conventional hair restoration methods such as the HairMax Lasercomb, pharmaceutical drugs such as Finasteride or even hair transplant surgery.

Chinese herbal medicine is a natural alternative for hair restoration, grey hair reversal and overcoming health disorders that often result in thinning hair. Whilst there is little doubt that underlying ailments that ultimately cause hair loss can be cured using Chinese medicine, the big question is, can Chinese herbs prevent hair loss caused by regular male pattern baldness?

First off, it is highly recommended that individuals visit a doctor of Oriental medicine rather than self-treating with herbs, since he or she will mix an herbal tonic based on specific needs, and can also establish if there are any underlying causes of your hair loss first.

Vitamin deficiencies, poor nutrition, chemotherapy or hormonal problems can all cause or worsen cases of hair loss.

Chinese herbs that are believed to promote hair growth

Fo-Ti or He-Shou-Wu (Polygonum Multiflorum) has been used by Chinese practitioners for hundreds of years for thinning hair and baldness. Modern research has shown that fo-ti contains an alkaloid that has a rejuvenating effect on the nerves, brain cells and endocrine glands. In China, processed fo-ti has been used for centuries as an anti-aging tonic. In addition, the herb is said to reverse greying of the hair.

Dong Quai (Angelica) is also known as Dan gui. This herb is used to stop hair loss and is said to stimulate re-growth. Dong Quai contains phytoestrogens which inhibit the formation of DHT, the principle cause of hair loss in men.

Nu Zhen Zi (Ligustrum Lucidum) is considered a Yin kidney and liver tonic. In China, it is used to improve circulation to the scalp, help with hair restoration and prevent hair loss.

Wu Wei Zi (Schisandra Chinensis) is a widely used herbal tonic used, among other things, as a cure for baldness. It has been used as a hair restorative for centuries, said to build the quality of the skin on the scalp.

Eclipta Alba: This plant is widely distributed throughout Asia. In ayurvedic medicine, the leaf extract is considered a powerful liver tonic and is said to be especially good for the hair. A black dye obtained from the plant is used for dyeing hair and tattooing.

Salvia Miltiorrhiza or red sage: Used in hair tonics as it is said to improve blood circulation