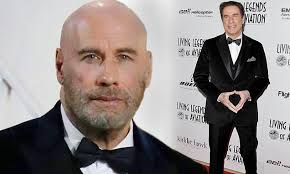 We recently applauded John Travolta on these pages for finally ditching the hair system and sporting a fantastic, bald look. The worry was that this might be a sign the Hollywood superstar was preparing for life in a slower lane. So just what has he been up to since?

John Travolta, after decades of deploying his hair as a powerful weapon, eventually succumbed to the pleading of a close friend and embraced his bald appearance. Being John Travolta it was a spectacular event that caught him unawares. He was quoted as saying it felt like he was “Zoolander,” a reference to Ben Stiller’s globally successful male model character in the film of that name. A simple Instagram post of him on a night out with his daughter, but without the hair system, turned into a viral storm.

Media interest was acute and Travolta found himself providing interviews for desperately interested news agencies from around the world. His message was a positive one, that he was “going for it” and looking forward to a simpler life free of the routine and stress that came with maintaining his appearance under the system.

If there was, when it happened, a chance that this was a signifier that Travolta might be ready to scale back on his work that has been blown out of the water in the month or so since. He has been zipping around the States on promotional work for upcoming roles but finding time to take his eight-year-old son to Superbowl. He is currently to be found in Italy where he is the celebrity guest of a small teen music festival in a provincial town where his attendance has gone down a storm… and where the absence of that hair system has barely had a mention.

It would seem there is absolutely no intention of slowing down. In fact, if Travolta’s comments are anything to go by we can expect to see much, much more of him and his handsome bald head on our screens, big and small, for time to come.

Great news for bald men everywhere. Like a big name free transfer from a rival team, John Travolta is a huge addition to our ranks, joining Bruce as a senior Hollywood star with a bald head but unquestionable sex appeal. The more that can be done to blur the line the media like to create between those two things the better.