Why not get a hair tattoo to hide your baldness? 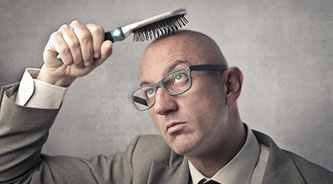 Scalp micropigmentation is a very effective way to address balding. It may be in its early or latter stages, it might even be anywhere in between. This would hardly hold any bearing when using this procedure. The result is always the same, a scalp that gives an accurate representation of real hair follicles. It creates an illusion of hair that is can easily be mistaken for actual hair. No other treatment can match the efficiency of scalp micropigmentation. It is among the quickest ways to address any hair loss situation. The recovery time is also relatively quicker than most cures for baldness.

Ricky Santiago was concerned about his receding hairline. It exhibited some mild fading in the temple areas just like how male pattern baldness usually begins. He wanted to lower it down a bit to make it appear a bit edgier. People would often ask him about his appearance wondering why he shaved his hair even if his hairline was still good. Ricky did not really tell anyone that he had scalp micropigmentation except when his hair was the topic of the conversation. He also felt it easier to disclose such information if he was speaking with someone who was likewise undergoing hair loss. Santiago shares however that he received exactly what he was expecting from a scalp micropigmentation treatment.
The procedure itself went quite well for him. He did not feel a lot of pain, at least nothing that was too severe that would cause him to stop receiving treatment. Ricky also said that the redness from the operation quickly subsided. It did not last the next morning. He was even expecting that some scabs would result from it though to his surprise, none formed over his skin’s surface. The needlepoint might have been so small to cause any significant wounds. This might create obvious crusting on the scalp of other patients though he was lucky to avoid it. Santiago was even able to go back to work the next day.
The practitioners who handled his case did an excellent job. Ricky went through three sessions with two technicians working on his scalp. He only had praises for the service they rendered and was quite appreciative of how accommodating they were. After the first treatment, he wanted the hairline lowered a little bit. The practitioner was quite happy to do this for him and drew another design to follow Santiago’s specifications.
Ricky really recommends scalp micropigmentation to anyone undergoing hair loss. Researching online and going to the HIS Hair Clinic website will provide more information about this procedure. It is also advisable to join forums to be able to chat with patients who have had actual treatments done. Meeting up with them in person can likewise be a great way to see the quality of work on their scalp. Hopefully this could lead to a visit to the clinic to receive a consultation for their hair loss. Having a simple chat with the practitioner can lead to an accurate diagnosis on their state of balding.