Twins demonstrate the ultimate scalp micropigmentation before and after 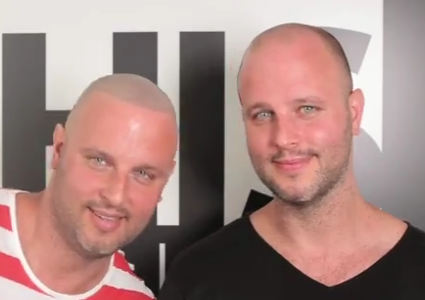 Having a treatment done is sometimes easier through some encouragement. It also helps when a prospective client sees someone he knows get it before he does. This gives an opportunity to study it in more detail and receive first hand information about it. Scalp micropigmentation, though having been around for more than a decade is still a relatively new procedure for most people. Twin brothers, Shane and Steve describe how they felt about receiving their treatment.

Steve recounts that fifteen minutes into his first treatment caused his eyes to water and his nose to get runny. This seemed like a normal occurrence because his brother experienced the same thing. He had an easier time however by the time the second and third session came about. There were just some areas in the front and back of the scalp where he felt were more sensitive. It was nothing he could not handle however because he only sneezed a couple of times during the latter sessions which took about three hours. Steve felt that his treatment was very well made. Nobody at his workplace seemed to notice that he had a procedure done. Even his close friend could not distinguish his real hair from the pigments. He was critical of Steve’s decision to get scalp micropigmentation at first but was already quite impressed when he saw the initial results even if it still needed to be completed.
Shane had his procedure done before Steve did. This was actually what motivated the latter to go get his done in the first place. He saw that Shane’s scalp micropigmentation looked good and asked that for same technician to do his. Steve eventually had his hair pattern altered slightly, requesting that it appear a bit harder. Shane however also changed his edgier look to make it appear more refined.
The twins agreed that they really liked their scalp micropigmentation experience at HIS Hair Clinic. They appreciate the effort to make them feel relaxed and welcomed at the facility. Nothing is really done without their initial consent and they thought that the entire staff was really very personable. Scott observed that potential patients were brought in to witness one of his sessions. This could have helped them make their decision upon seeing how good his scalp micropigmentation was turning out to be. He felt that this was a nice way of aiding those who require more encouragement to go through with a life-changing procedure.
What Shane and Steve found reassuring was the way the practitioners would come in and compare their work with each other. They felt how much they cared about their patients. While some might view it as a bit sentimental, the twins saw it as a very important aspect of the service. It is true that the technicians have to do a good job however the twins saw true passion they had for their work. These practitioners always consider how their patients feel and go beyond what is required of them. The twin really appreciated how well they were treated at HIS Hair Clinic and recommend that anyone going through a balding condition to come in and get a consultation as well.