The removal of scalp micropigmentation by laser 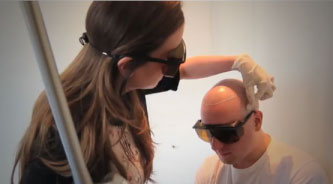 Getting treatment for hair loss can be a bit daunting for anyone. It is natural to feel apprehensive about it on top of an already sensitive issue. A client who entrusts the service provider with his scalp hopes that their balding condition can be remedied. Slowly losing their hair is traumatic enough. They do not expect it would be made worse by seeking treatment.

This video features Andre at the HIS Hair Clinic on Harley Street having a laser removal procedure to take off scalp micropigmentation performed by another establishment. The reason for the visit is because it did not turn out well. His hairline where he received treatment is actually darker than the rest of his scalp. It is as if a marker was used to draw a thick line instead of dotting separate pigments over the required area. Andre only wished that the scalp micropigmentation could increase his hairline and blend in with his real hair. This establishment however, was only successful in amplifying the difference between the two.
Around two years ago, he noticed his hairline beginning to recede. It affected his confidence and wanted to do something about it. This prompted him to engage the services of the previous clinic he visited though it did not turn out as planned. Fortunately, he found HIS Hair Clinic online to take it off the erroneous scalp micropigmentation and have it replaced by a new treatment. Andre was assured that it could be done properly this time around. He hopes that others would not have to go through the same ordeal he went through.
The HIS Hair technician who handled Andre’s case recognised how poorly the scalp micropigmentation was performed. Some testing was done prior to the laser removal procedure to find out his skin type in order to determine how prone he was to pigmentation and scarring. It was done over a small area that yielded positive results because it exhibited a good amount of fading. The equipment that was used was a 1064 nm Nd:YAG laser machine which was able to emit the right wavelength perfect for Andre’s skin. This would be able to do the job though it still could not be determined how many treatments he would have to receive. The ink used looked quite dark on his hairline and only after successive procedures could it be found out how deep it seeped into his skin.
The initial laser removal procedure only took about two minutes to complete. It went well and Andre’s skin reacted nicely to the treatment. There was some whitening over the surface area, which is quite normal. This was a good indication that the treatment was effective. The ink however will only exhibit noticeable fading after six to eight weeks. It is only after such time that Andre should return to the clinic to have more sessions until necessary to undo what was performed by the other facility.
Laser removal is not as painful as some might think. Andre described the discomfort he felt as quite manageable. It was similar to being pelted by the snap of a rubber band as the device quickly moved over his skin. The good thing is that he felt a lot better after the operation. He is looking forward to returning after a few weeks to complete the whole procedure.