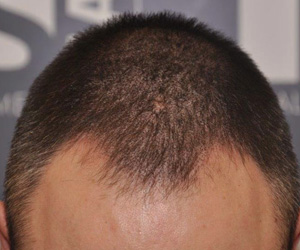 Balding can manifest itself through various ways. There is the very unpredictable alopecia areata or the stress induced telogen effluvium. Hair loss can also occur through abnormal pulling as evidenced by traction alopecia and trichotillomania. There are other cases influenced by illness, disease and even medication. The most common out of all occurrences of balding however is androgenic alopecia. It is the most reported among all the types of hair loss for both men and women.

Male pattern baldness is a progressive condition that may take years before it reaches its final stages. It is the type of androgenic alopecia that begins in a man’s early thirties, initially exhibiting a receding hairline at the temporal areas. This gradually advances into the frontal region that will thin and recede as well. The hair loss will continue into the vertex region, beginning with its center and moving outward. These areas will eventually meet at the top of the head, producing baldness over the entire space. The only location with hair coverage would be the lower sides and back of the scalp.
Men have resorted to different methods to remedy this condition. Hats and hairpieces used to be a quick fix for their situation. This however proved to be a superficial solution to their predicament. Demand for a more realistic looking method was required. The creativity and ingenuity of scientists did not disappoint. Soon they came out with different products and services to ensure that balding of any type, did not seem so obvious. Shampoos were developed to thicken hair and when coupled with certain camouflaging agents, created a denser appearance. Hair transplant surgery offered a more invasive approach to treat hair loss. The use of the patient’s hair to hide their balding areas became quite an effective solution. Out of all these remedies however, it is probably scalp micropigmentation that provides the best and most permanent treatment for hair loss.
Due to its progressive nature, male pattern baldness will continue to cause the hairline to recede as the years go by. There has yet to be a total cure for it though scalp micropigmentation comes quite close. It is able to address the slow advancement of hair loss by permanently creating an illusion of hair upon the scalp. This would only require occasional touch-ups every four to six years to retain the vibrancy of its pigments. Cleansing and moisturising the scalp along with trimming the existing hair every couple of days is all that is necessary for its basic maintenance.
Scalp micropigmentation can also be effective with long hair. There are just additional requirements in order to complete this look. The balding condition should be limited to diffuse thinning as well as the hairline being intact. These are the symptoms of female pattern baldness though a man’s androgenic alopecia in its earlier stages might exude these same qualities as well. The areas where hair loss occurs should not be so dense that the existing hair can no longer provide sufficient coverage. A cluster of baldness despite being covered with pigments will be obvious against hair that is at a certain length.
Keeping hair longer after scalp micropigmentation is quite possible when there is an awareness of the disparity that it may cause. Being able to balance the areas between actual hair and pigments is necessary to maintain the semblance of a full head of hair. There should be a seamless effect provided by these two elements working together. The pigments are layered over the exposed scalp while the hair complements the former with adequate coverage. A large balding area might create an obvious concentration of either element. When this happens, it is better to just shave off all the existing hair provided that there are already pigments in place over the entire scalp.

Previous Post
Bald with a beard is definitely in right now
Next Post
What problems are associated with scalp micropigmentation?