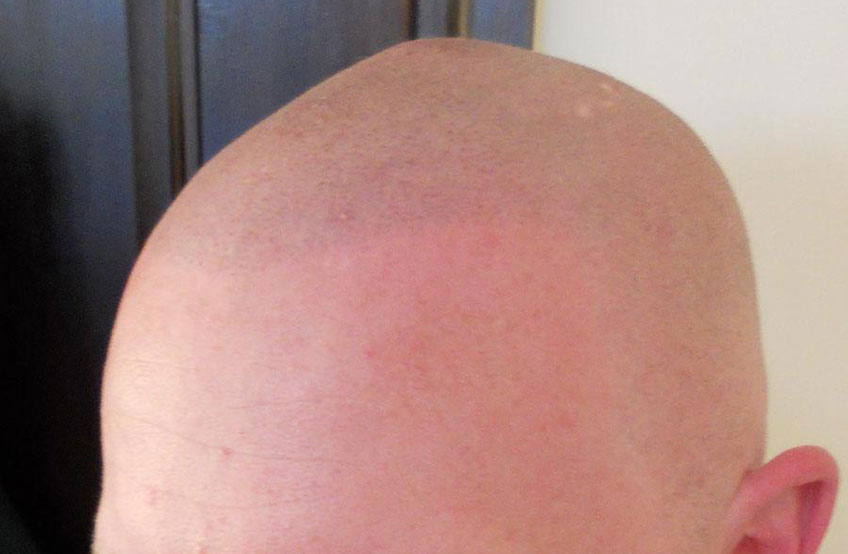 It has been a while since I discussed my own experience with hair loss. As the moderator of the HIS forum I tend to spend most of my time supporting others, answering questions and giving advice. For this reason it doesn’t feel right to talk about my own situation too often, feels a little self-obsessive somehow. But like I said its been a while, so I guess it’s no problem.
I suppose my story shares a lot of common traits with other clients of HIS. I’m not really sure when I started to lose my hair because I think I was in denial for quite a long time. My best guess is that I was around 24 years old when I first started to notice, but by the time I reached 27 it was really starting to become noticeable, and it was bothering me more and more. I’ve always had a high hairline anyway but it was getting higher, and when I used to spike my hair up I could see more of my scalp through my hair as the months and years passed.
Like many of you, the thought of getting a hair transplant or a hair system never crossed my mind. Hell, at the time I didn’t even know what a hair system was, unless it was referred to as a wig I guess. I had no idea what minoxidil or finasteride were, or what they’re used for. The reality is that if you’re not losing your hair, you don’t make it your business to know. Why would you? I was probably destined to be one of those suckers who buys every miracle shampoo or lotion that claims to make your hair appear thicker, because I didn’t know any different at the time.

Anyway, I used to work for the Trinity Mirror Group, the company that owns the Daily Mirror and a range of other British newspapers. I came to visit HIS Hair Clinic one day on a sales visit and Ian, Ranbir and I just hit it off. A few short months later and I’d left my publishing career behind and I joined HIS as their marketing guy. That was 5 years ago now.
I’d been working for the company for 4 years before I finally decided to have SMP myself last year. Why did it take me so long? Honestly, I don’t know for sure. Perhaps I was still in denial to a certain extent, or maybe even despite working for the company and coming into contact with literally thousands of guys who had it done, I was still looking for the catch. I had all the same concerns as many of you like how it would look years down the line, whether it would suit me or not, and what my family and friends would say. Even after I made the decision to do it, I was still looking for excuses to put it off just a little longer in case the ‘catch’ presented itself to give me an excuse to back out. Sounds ridiculous, I know.
One perk I had as an employee was that I could choose my practitioner, and I chose Simon because he’s the one I knew best and felt most comfortable with. I helped him document his own story, after which we became friends so it was the obvious way to go. That said, I have a huge amount of respect for all the practitioners in Birmingham, so I’d have been happy whoever I was allocated to.
All anxiety and doubt was gone immediately after my first session. The relief is hard to explain. It was partly down to the fact that I knew how much it hurt from then on (which wasn’t too bad anyway), partly because there was no turning back so I had no way of procrastinating any more, and of course because I could see how my new appearance was coming together and I realised I really liked my new look. Honestly, it was an incredible feeling. Sessions 2, 3 and 4 swiftly followed, the pigments settled, and here I am nearly a year later, happy as can be.
The really weird thing is that although I knew losing my hair was getting me down, I didn’t realise how much until after I had it done. It wasn’t so much about getting my hair back, but more about losing the anxiety and confidence issues that come with going bald. I don’t look in the mirror and think ‘wow’ like some people do. For me, the biggest benefit is simply not having to think or worry about it anymore. The issue is gone, and I’ve been able to move on a much happier man.
For those who are interested, I started out using clippers on a zero. Then I moved onto the Wahl Balding Clippers that cut it a little shorter, then to a Remington R655 rotary face shaver. Now I wet shave in the shower every other day. I use a standard facial cleanser to wash my head, I moisturise with HeadBlade Headlube matte and when I need to use sunscreen, I use a light SPF15-25 cream. My personal favourite is Calypso spray, but Nivea Light Feeling is also very good. By far the best results I experience are from wet shaving, and its the only method where I can shave every 2 days rather than every day.
I remember a thread Haircules started a while back. It was all about improving yourself after SMP. More specifically, it was about getting the body you always wanted. That’s next on my agenda. I’ve always been a bit flabby around the edges, but I realise now that I’m just procrastinating like I did before I had SMP.