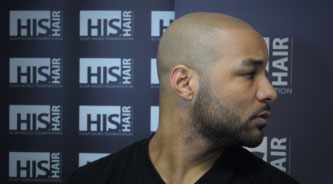 There is something about suddenly experiencing hair loss that might make a person feel anxious or even upset. A lot of uncertainty may accompany its onset. Those who have not sought professional help would find it difficult to select a remedy on their own. They would be unsure on which step to take because of the many anti hair loss products and services that are available for them to choose from. Those that do receive prior consultation are able to get accurate treatment for their balding condition. This is a highly recommended step to help men going through hair loss to regain their confidence once more.

Tyrell’s story began with a slowly developing case of androgenic alopecia. He did not mind it at first however he noticed that the temporal regions of his scalp receded more and more. It suddenly sped up in less than a year and even began to include some hair in his vertex area. This was confirmed after he made visit to a barbershop. It was here where the barber told him that he was thinning excessively at the top of his head. He was not too pleased with this observation and he decided to shave his head to conceal his hair loss.
The balding continued which made Tyrell feel quite overwhelmed. This prompted him to do some research online about the possible ways to remedy his condition. He came across the HIS Hair Clinic website which actually took him about a year and a half before making a decision to come in for consultation. Tyrell thought that he was going to be shaving his head his whole life so he might as well make it look better. Having pigments in place would definitely help enhance the appearance of his scalp even if his actual hair grew a bit longer.
Another thing that he wanted treated was the semi-circular scar located on the upper left side of his scalp. His mother told him that as an infant, he accidentally fell from the bed unto the tile floor causing a dent on that part of his head. The surgeons had to operate to reshape his skull resulting in the obvious scar he bears today. He does not mind leaving much of it exposed however because treating it fully might result in his head looking more flat than he wants it to appear. Tyrell only requested for less than a third of it to be filled-in by scalp micropigmentation.
This was a treatment that felt right for him to do. He was never partial towards hair transplant surgery because he thought that it was a bit extreme. Tyrell wanted to go for a scalp micropigmentation design that resembled how his hairstyle appeared when he first started shaving his hair. Reading a lot about the procedure made him more and more comfortable with the thought of going through with it.
After receiving his scalp micropigmentation treatment, it is safe to say it was very successful. He maintains it by shaving his head every two to three days by going against the grain. It only takes a couple of minutes to finish and he could even do it while showering. He was able to care for it well because the pigment design did not exhibit any patchiness or obvious fading a year after his last session. Tyrell was as happy with it as the first day he received his scalp micropigmentation treatment.