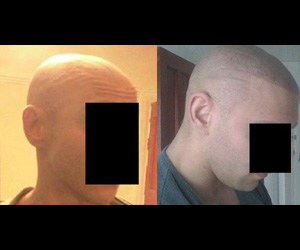 The popular bald fade or military haircut, is possible to recreate using SMP

Prospective clients can dream up of distinct hairstyle patterns before their real treatment. Any scalp micropigmentation (SMP) provider would gladly strive their best to accede to their request. It has to give however to the constraints of what’s possible in order to keep a consistent illusion of hair upon the scalp.
There are basic SMP treatments which have been proven to work. The very first is the well-known “only-shaven” design. Having hair growth in areas such as the sides and back while presenting no or minimal growth at the very top of the scalp of the head will make the pigments clearly distinguishable. This is because the two-dimensional look of the latter and of the three dimensional element of the former. SMP can also work with existing hair as long as the hairline remains intact and also the vertex region is just showing mild diffuse thinning. Concealment of scarring is another basic SMP process. It normally follows the same principles of the very first two treatments depending on the current state of the region enclosing the scar in regard to potential hair coverage.

A hairless fade resembles a military style hair cut. It is almost bare on the sides of the head together with the density gradually getting thicker as the scalp moves upward. This is sometimes referred to as a white sidewall style, together with the hair in addition to the head remaining as the thickest. Saying that this is potential with SMP by using the existing hair treatment style is partly accurate. After all, the hairline remains complete and there’s just diffuse thinning which is being demonstrated by the entire scalp. The thing however is that male pattern baldness is a progressive process. The hairline will recede and also the very top of the scalp will end up devoid of hair. Could a hairless fade design be created with SMP alone?
At the outset, it seems that recreating this style together with the use of only pigments might be impossible. At first, you might think a three dimensional outcome can never be reached with two-dimensional parts, and it runs the danger of discovery. This is correct up to a particular extent, for a bald fade hairstyle to work, nevertheless it does not necessarily need long hair growth on top. All it demands is that it seems denser than it does on the sides. This can be achieved by layering the pigments in a fading design beginning with a lighter colour in the bottom as darker rises to the top getting it. The look ought to be maintained in its aftercare by shaving the existing hair daily.