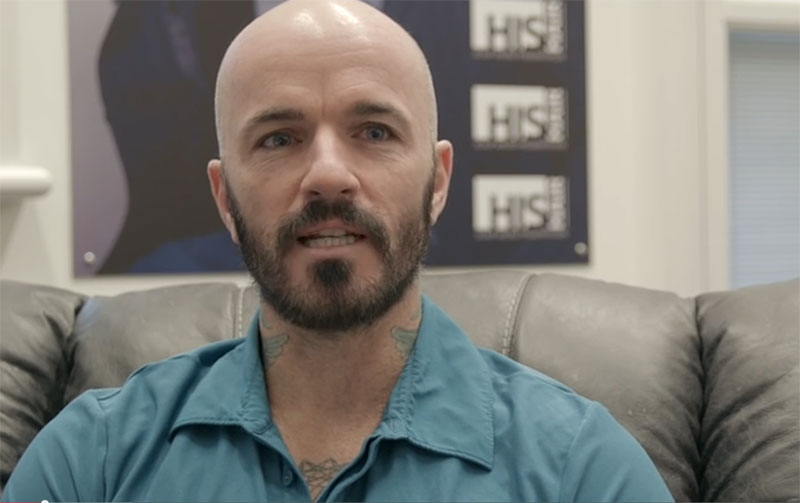 Arri is a forty-year-old Australian who started losing his hair in his mid-twenties. He believes this was made worse during his thirties when he did all sorts of things to his hair such as bleaching, braiding and coloring it. Eventually it got thinner and shorter until he decided that it was best to shave it all off. Arri did not really feel so attached to his hair. He says he was able to embrace the fact that he was going to lose it early.

Scalp micropigmentation was something he first heard about through a friend of a friend who had an actual treatment done. This was three to four years ago but Arri seemed a bit apprehensive about it even if he was open to the idea. He kept on putting it off though talk about it did not seem to go away. Arri was aware of how HIS Hair Clinic was known as the best establishment for scalp micropigmentation. Fatefully, he happened to be in Birmingham one day and decided to come in for consultation. It felt very natural for him to just talk to the staff about his hair loss. He did not really have any outlandish expectations and just wanted to see what kind of experience the treatment would provide for him.
Arri had a very relaxed mindset when he underwent his sessions. He had complete faith in the staff and knew that he was in good hands. The results were something that pleased him. He felt that it looked very natural, with a subtle hairline. It was a normal looking outcome that suited him quite well. Nobody really noticed that he received treatment for his alopecia.
The first session was all about establishing a good foundation, getting the shape of the hair pattern right and determining the appropriate color. This was used by the second session to build the next set of pigments upon. It followed the main design and slowly filled it out more and more taking roughly over three hours to finish.
Arri really felt comfortable with the practitioners. They were easy to speak with and it was just like having a regular conversation. The desk staff was likewise very hospitable. Everything was a pleasant experience. He did not even feel any significant pain during the process. At no point did he feel that he needed to stop because it was too painful. He did not even have to move from his position while he was receiving his pigments.
The best advice he could give to those who are thinking of scalp micropigmentation is to come in for a consultation. They can openly discuss what they are hoping to achieve, get some advice on their plan and know the actual cost of the procedure. This could help them get reassurance that this is the right treatment for them. Arri really recommends that those who have been putting it off should just go for it. He delayed doing it himself and he is now quite glad that he finally decided to get scalp micropigmentation.