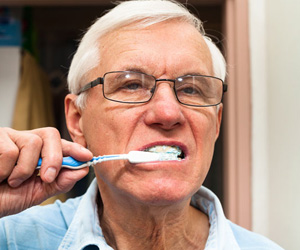 If you’ve been reading along that past few months you would have learned that if you want to save your hair you need to drink more coffee and smoke less. Now it would appear, as new research would suggest, that can fight hair loss by simply brushing your teeth.

You read that correctly: brushing your teeth may be a crucial step to ensuring that you fight off the ill effects of losing your hair.
How so? New research from the US National Institutes of Health in Maryland did a study that discovered that dental cavities are caused by mutations in a protein called keratin. Keratin is a structural protein and is a building block for making the outer layer of the skin and a key structural component of hair.

The research done by Dr. Oliver Duverger linked the keratin mutations in tooth enamel causing cavities to have a similar ‘abnormal structure’ as those that result in the weakness of one’s hair. That is to say that Dr. Duverger’s research discovered the breakdown found in hair and tooth decay is caused by the same mutations in the keratin proteins.
In an article featured in the Daily Express, Dr. Duverger said, “Functional analyses revealed that mutations in hair keratins result in altered enamel structure and reduced enamel micro-hardness.”
How so? A human’s hair shaft is mainly made up of the keratin protein, which is also found in tooth enamel. Dr. Duverger’s study of both humans and mice first looked at the presence and function of a specific set of hair keratins in enamel. What they found in their research was the keratins lacked the whats called the ‘DLX3 chemical’ which is responsible for regulating the way the protein is synthesized and modified in the body.
The research then made the connection between the epithelium keratin found in the hair with the same in tooth enamel. This means the keratins found in hair are also crucial building components in tooth enamel. And suffering from a keratin mutation that leads to tooth decay can also result in hair weakness.
In short, healthy teeth may result in hanging on the hair you got for a little bit longer. So to save your hair make sure you’re brushing those pearly whites every day.

Previous Post
Perception of the close shaved hairstyle in modern Britain
Next Post
Coffee and Hair Loss: Is Caffeine Causing Us to Lose Our Hair Faster?