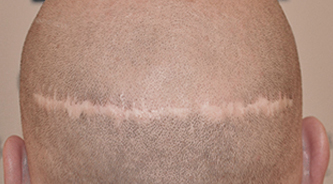 Fraxel is a non-invasive fractional laser treatment used for treating sun spots, fine lines, melasma, acne and stretch marks. Of special interest to those suffering with hair loss is that Fraxel procedures can also reduce the appearance of surgical scars, including hair transplant scars.

Fraxel was not actually developed with the intention of repairing surgical scars, but primarily for skin resurfacing following acne, pregnancy and excessive sun exposure. As it happens, Fraxel has subsequently been proven to reduce the appearance of both surgical and traumatic scars (scars caused by an accident or other event), with minimal downtime and barely any side effects.

WHAT IS A “FRACTIONAL” LASER?

HOW DOES FRAXEL WORK?

The Fraxel laser produces numerous microscopic laser columns that penetrate into the deeper layers of the skin to stimulate your skin’s own healing process. The damaged skin is then replaced with collagen produced by your own body. The result is a smoother, healthier appearing scar that is consequently less visible. 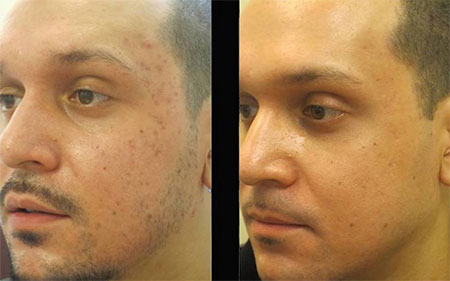 With over half a million procedures already performed, Fraxel has an excellent safety record. It is safe to use on all surgical scars and will not compromise the surgery in any way. Fraxel is effective on all skin colours because it does not target melanin, the pigmented cells in the skin.

IS FRAXEL A VIABLE OPTION FOR THOSE WITH TRANSPLANT SCARS?

We believe so, in fact we’re very encouraged by the results we are seeing. Virtually all those who undergo a scar revision using Fraxel end up with a scar that is far less visible, as the technique has the effect of flattening the scar area, whether the scar itself is raised or indented from the scalp. This is likely to make an Scalp Pigmentation MHT® scar revision process more effective, as there would be less contrast between the scar and the surrounding area, enabling more effective blending.

IS HIS OFFERING FRAXEL AS A PART OF THEIR SCAR CAMOUFLAGE PROGRAM?

Not yet, as our research in this area is still ongoing. We do not discourage those who wish to have a Scalp Pigmentation MHT® treatment to also have Fraxel, although we do not offer a combination service in-house or recommend any individual clinics or practitioners. We will provide updates as and when they become available.

Below is a video providing more information about Fraxel treatments. There is very little verifiable material online at the moment about how Fraxel can help with hair transplant scars, hence why the video below shows a patient having treatment for acne scars, however it should provide a general overview of how Fraxel works.