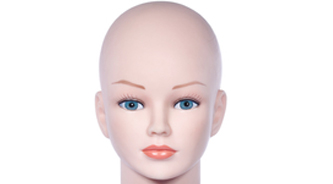 American Girl follows in Barbie’s footsteps with bald doll to help children with cancer cope with their hair loss. Following the footsteps of Mattel’s bald Barbie, American Girl is now releasing its own dolls aimed at children suffering from hair loss. 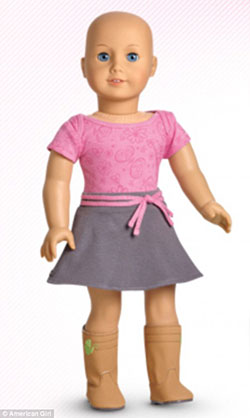 Earlier this year, parents took to Facebook and Change.org to put pressure on Mattel to create a special Barbie, in the hope that children suffering from hair-loss would feel better about themselves.

The post read: ‘For more than a year, American Girl has been hard at work developing a doll without hair option for girls affected by cancer, alopecia, or any medical condition causing hair loss.

‘Debuting today as part of the My American Girl line, the new dolls provide even more possibilities for a girl to create a friend that’s as unique as she is.’

According to the company’s online store, the dolls are available in five skin tones, and eye colours.

For children who already have original American Girl doll, the company is also offering to switch the doll’s head for a hairless one.

While some may view this as strange, many girls who suffer from hair loss would like dolls that look like them, rather than perfectly put-together mini-figures, according to The Stir.

A 13-year-old girl from Tennessee may have helped to nudge the company along using a fierce social media campaign.

Kayla Brooks told WKRN she spent months gathering 2,000 signatures, made phone calls and started a letter based petition to American Girl in support of the bald doll.

Despite not knowing anyone personally who does not have hair, Miss Brooks made it her mission to help others.

She said: ‘It doesn’t matter if they think I played a role or not. I know I worked hard on it and got the word out. Maybe I gave the idea to someone who did something.’

American Girl announced the company also plans to donate many of the dolls to the Children’s Hospital Association.