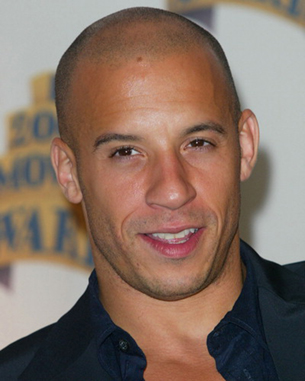 Mark Vincent, or Vin Diesel as he is more commonly known, exploded to stardom following a series of multi-million dollar blockbuster movies that took the cinematic world by storm. Vin Diesel was very much the right personality thrust into the limelight at the right time, and the world adored him for both his no-nonsense yet spirited acting performances, and his universally appreciated good looks.

Vin Diesel is one of those individuals who it would be difficult to imagine having a full head of hair. His chiselled, well defined look perfectly suits the shaven hairstyle, and whilst he sported the totally bald look in The Chronicles Of Riddick, most of us would agree he looks far more agreeable with a cropped hairstyle.