You have to hand it to John Cleese. The veteran actor and writer has made the nation laugh more at his antics in recent days than he did when he pranced about naked in A Fish Called Wanda 20 years ago. And this time it’s for real.

At the age of 69, he’s been proudly discussing how he maintains his trim physique – ‘those really muscular arms’ and ‘amazing legs’ so lavishly praised by his former girlfriend, American comedienne Barbie Orr.

As my favourite Python puts it: ‘When you get to my age, you do running repairs.’ And it seems John’s have come courtesy of a cosmetic surgeon or two, with four hair transplants and heavyduty dentistry. 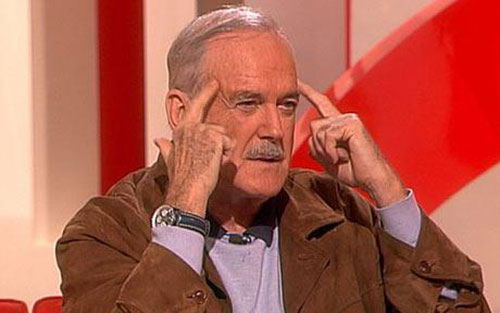 Maybe this is what happens when a thrice-married, thrice-divorced Englishman gets mixed up with a real-life Barbie doll, who tells whoppers about her age (Ms Orr claimed to be 27, but it transpires she’s 45, as if one couldn’t guess just looking at her wrinkles).

But I have to admit, I’m disappointed. I thought John was too sensible to try to turn back time like some cosmetically enhanced King Canute.

As a 62-year-old grandmother and great-grandmother, I have to tell him: forget ‘running repairs’ and accept the reality of your maturing years.

Get to a certain age, male or female, and the depredations of time cannot be denied: you may get a facelift, but what about those baggy knees? Remove the man-boobs with liposuction, but how about the elderly backside?

When Barbie announced to the world in her stage-show that Cleese had ‘the package of a 19-year-old’, I winced to think how he might have acquired that. No wonder he ditched the silly woman.

The work on his teeth I can sympathise with; a row of blackened gnashers with gaps between the tombstones is not nice. My front teeth got knocked about when I fell off my bike and the crowns are a great improvement, I reckon. But why would a successful man go further than that?

I wonder what John thought he was doing. He claims the hair transplants were necessary because he doesn’t like wearing wigs in his movies; but more than one Hollywood actor has gone bald and John could shrug and do likewise.

Anyway, it’s far too late. In A Fish Called Wanda, all those years ago, we all had a lot of fun spotting his enlarging bald patch; John might not have seen it, but we did and we liked him no less for it