Nell Bryden on dealing with Alopecia 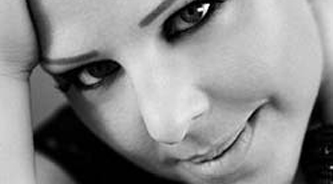 Sitting in front of the mirror in my New York apartment, I saw a reflection I hardly recognised. I looked sick. My hair was so thin, large patches of my scalp showed through. My eyebrows and eyelashes were practically gone, too. This wasn’t me, I thought. It felt like a nightmare. But it wasn’t. 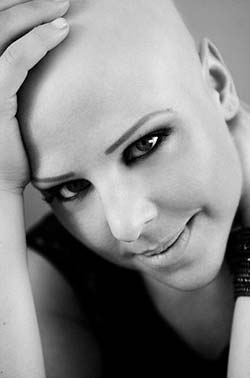 Until this moment, I had never realised how much my hair had been intertwined with my identity.

I picked up the clippers I had borrowed from my father and I raised them to my head. At the moment the buzzing metal hit my skin, a giant clap of thunder rang out. Rain began to fall outside as what was left of my hair fell to the floor.

Just three weeks earlier, I had bouncy blonde locks that I could gather into a ponytail or curl into ringlets. I half-heartedly complained about bad hair days but I never really had any. Sure, I had my little insecurities, like most women, about my thighs and my nose, but my hair had never been one of them.

I was confident, healthy and feminine, and I assumed that I would always stay that way. If you had told me when I was younger that I’d be completely bald by the age of 33, I’d have laughed.

So how did this happen? To tell you that, I’ll have to start at the beginning. I spent years playing guitar and singing in small clubs across the US, where I was born, steadily building my confidence.

By the time my debut album, What Does It Take?, came out in the UK in 2009, I had been touring for six years, averaging 250 shows a year, including performances with KT Tunstall. I was my own manager and booking agent, and I wrote my own songs, too.

My singles played on BBC Radio 2 – I was living my dream. But I was living at a breakneck pace. A typical day for me was 16 hours long, with radio sessions, travelling, interviews, performing and meeting fans afterwards.

I never took holidays and went home only every six months to check on my New York flat. I told myself that when I’d won a Grammy, I’d take it easy.

One day last spring, I was on my way to a meeting when I noticed a few extra strands of hair on the sleeves of my blazer. I pulled them off one by one, putting it down to the hair extensions that the stylist had given me the day before.

Then, I began seeing strands splayed around my pillow when I woke up. I started to panic, but I had four more shows to play so I had to keep moving.

By the end of the week, I noticed the hairline at the back of my head had receded and I felt a bald patch above my right ear. 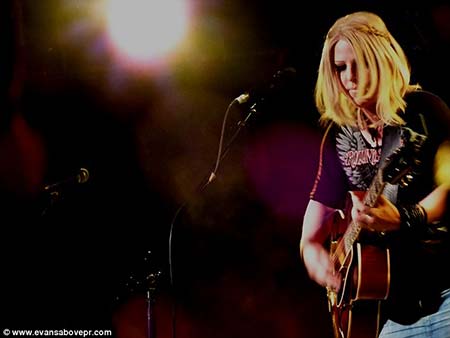 The first doctor I saw suggested I sue my hairstylist. The second diagnosed me with alopecia totalis, a stress-induced autoimmune disorder that causes the complete loss of your hair.

A third doctor confirmed it.

I’d never even heard the word alopecia before. The doctor’s advice? Try not to stress, you’ll make it worse.

I cried and continued crying for weeks. I flew home to New York to be with my family and hid under my duvet with the curtains drawn.

I felt a whole new level of vulnerability. I wondered if my career was over. Would everybody see me as a freak?

After a month of wallowing, something changed in me. I shaved my head on that stormy Tuesday evening and started mapping out the next chapter of my life.

Meanwhile, my GP told me there was a multitude of treatments I could try although most were not clinically proven.

She advised me to make my body an environment that hair would want to grow in.

I saw a therapist to reduce my stress levels, an acupuncturist every week and I started to take a range of supplements daily, including B vitamins, inositol for cell metabolism and L-Tyrosine for improved mood and brain function. I started to feel better but I was frustrated by the fact that I couldn’t get immediate results.

But the songs started pouring out of me. I’d written about loss and longing before but now I had a new understanding of what that meant.

When there was nothing more to hide behind, I finally found my voice. Once I started writing, I couldn’t stop. I came to London at the end of April with a new sense of direction.

I know it’s not about living for the pursuit of goals but about recognising the great things I already have. I take time every day to speak to my friends and family and I take time just for myself.

I was lucky because my major wake-up call wasn’t life-threatening. I am happier than ever. My hair is growing back, though very slowly, teaching me the art of patience. I wear a wig on stage and out during the day because I don’t want to be defined by the lack of hair on my head.

I also make sure I have drawn on my eyebrows and applied fake eyelashes each day because it is, for me, a way of not letting the condition be in control of me, of not giving in.

But in my downtime, I’m comfortable with myself as I am. I look at this photo and see a happy ending. Scratch that: I see a new beginning.