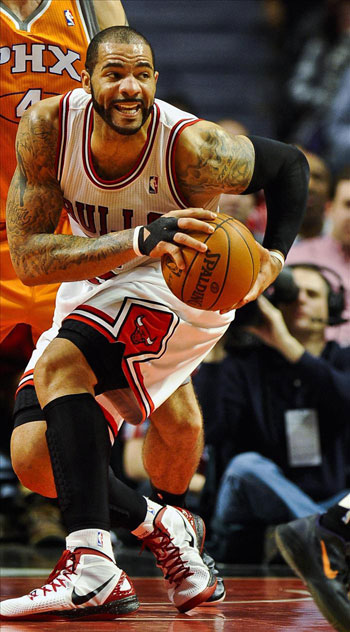 February 12th, 2012. The Chicago Bulls riding a five game winning streak roll into Boston to take on the Celtics capping off a nine game road trip. Carlos Boozer put in a top performance, notching 22 points, 7 rebounds and 1 steal, despite the team coming up short and losing to the Celtics 95-91.

Despite the effort, Boozer was the talk of the internet. Some felt he looked a little “off”; that there was something about him that just didn’t seem right. Others overlooked the basketball completely and saw a difference in Boozer, all right – the difference was the sudden appearance of a full head of “hair.”

Unfortunately for Boozer, this wasn’t the attention he was expecting after a hard fought battle. He quickly became the butt of the jokes, be it from the TNT game announcers to fellow teammate Nate Robinson using a sharpie marker to update Boozer’s new look on his bobblehead.

While the execution and the end-product didn’t come out as hoped (we’d imagine), one must ask, why would Boozer do this? What would drive him to essentially spray paint his head?

Diffused thinning is caused by the hair follicles regressing to a resting state, where the hair follicle remains dormant rather than continually producing a hair follicle. The actual hair follicle isn’t lost, per se, as it would be in the case of male pattern baldness, but it simply isn’t growing. When this happens all over the scalp, a person ends up having hair all over their head, however, it’s very sparse, giving the appearance of permanent hair loss.

Many men and women experiencing diffused thinning will turn to sprays and powders, to varying degrees of temporary success, giving them what appears to be a fuller head of hair. These temporary “solutions” bind themselves to the existing hair follicles, in attempt to cover the areas of concern. However, in most cases, the spray/powder is applied incorrectly or unevenly, leaving the hair loss sufferer with an unnatural look. In the case of Mr. Boozer, whatever product was applied was done so too dark and too thick, literally providing him with the appearance of having painting head.

How does diffused thinning occur? It’s widely believed that a “shock” to the body; experiencing such things as a sudden introduction to different vaccinations and drugs into the system, experiencing some form of trauma, crash dieting, and even sudden hormone level changes in women after giving birth can all be factors. Dermatologists believe that two main contributors are stress and diet.

Stress speaks for it self, but diet may surprise some. While it’s not just unhealthy diet built on junk food and the alike, but rather vitamin deficiency. For example, some dermatologists speculate that the lack of iron in a person’s diet, due in large part to the lack of red meat, can be a reason for the diffused thinning of one’s hair.

How could SMP be better a choice for Boozer? For starters, the SMP treatment in a permanent solution doesn’t need to be reapplied daily (sometimes multiple times) like most spray and powder concealers. He clearly wants to have the appearance of a full head of hair hair kept shortly buzzed, which is exactly the type of result that SMP provides. As long as Boozer has been in the spotlight, from his championship college days at Duke to through his entire NBA career, he’s always rocked the short buzz look. The maintenance would minimal, and the change to his style of haircut would be virtually nothing.

If you are experiencing what you think or recognize as diffused thinning and want to know more about how SMP can improve your appearance, don’t hesitate to contact client services to find out how you can set up FREE consultation.

Previous Post
How can a VBeam laser help to conceal hair transplant scars?
Next Post
The importance of UV protection after scalp micropigmentation