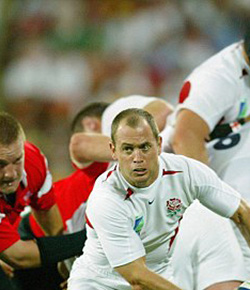 Dancing On Ice star Kyran Bracken spent £4,000 on a hair transplant operation before going on the show. The former England scrum half, favourite to be crowned king of the rink in last night’s final, went under the knife at the Farjo medical centre in London’s Harley Street last year.

The bald truth was revealed when Kyran, 36, posed for pictures on the company’s website. He is shown before and after the operation – which the clinic claims the star had to prepare for a new career in TV.

The company’s website says: “The former Saracens and Sale scrumhalf was always known by his fellow professionals for his flowing mane. When it began to go they certainly let him know about it. After extensive research he chose Farjo to carry out his hair restoration, and now at 36 looks forward to a successful career in TV.”

Hair transplants use hair follicles from nonbalding areas on the scalp. They are harvested then implanted in bald or thinning areas where they grow.

Skate ace Bracken – who shaved his head before the Rugby World Cup in 2003 after dressing room jibes about his receding hairline – had 3,500 hairs implanted in the one-day procedure. The dad-of-two is one of a number of stars on the company’s website. For more information see our Duncan Bannatyne hair transplant post.