As 28 million tuned in to watch the first episode of Two and a Half Men since the bizarre exit of Charlie Sheen, the focus was not on Ashton Kutcher, Charlie’s replacement, but on Jon Cryer and his re-appearing hair. 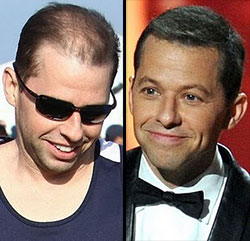 On screen Jon Cryer plays the hapless Alan Harper who lives in the shadow of his rich, alcoholic, womanising brother, Charlie Harper (played by Sheen); life imitating art anyone?

Off screen this week, Cryer was spotted finishing the Malibu Triathlon with a thinning crown on top, but then hours later he was up on stage at the Emmy Awards presenting an award whilst showing off a full head of hair?

Forget the confusion surrounding Charlie’s demise from the show, this is the real mystery!

Two And A Half Hairs!

For 46-year-old Cryer, the thought of going bald must be too much to ‘bare’ as experts believe he has used a toupee or weave, however there are more natural looking ways to create a look with thinning hair – as the MHT® scalp pigmentation proves!

HIS Hair have created MHT® scalp pigmentation that gives the appearance of a cropped shaved look for balding men.

With a clinic currently being opened in LA, Jon Cryer would have no difficulty heading into the treatment centre and coming out looking rugged and natural, rather than pretending he used miracle grow in the afternoon!