It’s a case of hair today and gone tomorrow as John Travolta has been recently spotted with and without the hair system in the same day.

Now having admitted to having to using a weave to give him the look of his younger days, he looks to have had some moments of confusion deciding to go without. 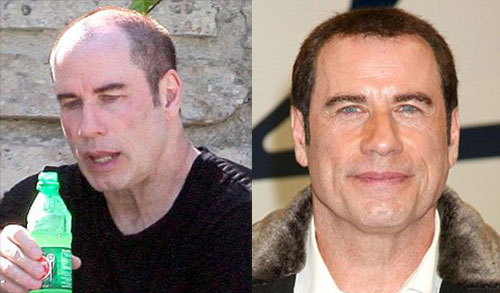 The 57-year-old Hollywood actor was seen sporting a much balder look after playing tennis with some friends, but then hours later he had a beaming smile on his face with a thick full head of hair.

The more natural look of receding hairline and thinning hair is a far-cry from his most famous role as ‘Danny Zuko’, where he had a plethora of luscious locks he continuously combed to make the girls swoon.

The Grease star seems to be unsure of the best method for balding solutions, however to create a look with more consistency, he could turn to MHT® scalp pigmentation technique that provides a more modern permanent style, than the old-fashioned toupee or weave.

The ground-breaking scalp pigmentation technique was pioneered and launched 9 years ago by HIS hair clinic and creates a natural looking simulation of micro hairs on the scalp, creating the appearance of a short cropped hair style, like Wentworth Miller and Vin Diesel.

MHT® involves no surgery, no scarring and no hair pieces, meaning Travolta could keep a constant hair style and avoid bad hair days like today.