Joanna Rowsell doesn’t let alopecia get her down 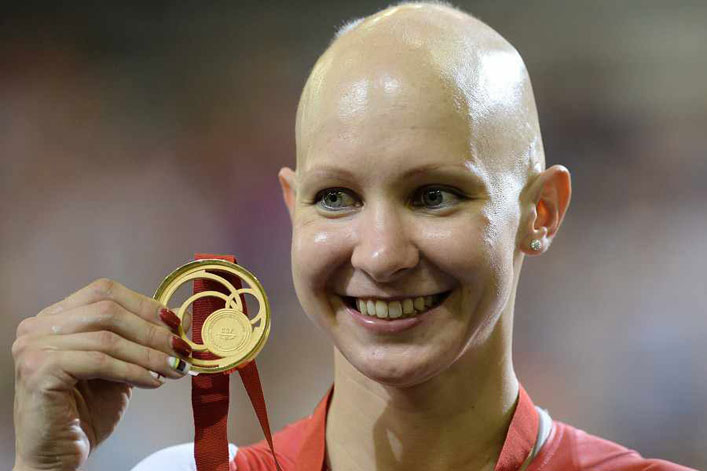 Diagnosed with alopecia as a young girl, the Olympic Gold medalist never let it her in way.

Two things happened at an early age for Olympic Gold medalist Joanna Rowsell (25): she fell in love with cycling and her hair began to fall out.

Rowsell describes the experience as being very hard on her. “I was gutted,” Rowsell explained. “I had been a girl who loved having my long hair in plaits.” Many tears were ahead as she couldn’t understand how or why this was happening to her. After numerous visits to doctors and specialists, it was finally confirmed that the alopecia was incurable.

Growing up, Rowsell admits to consciously rejecting a strong interest in things like make-up and clothes as she didn’t want to focus or think too much about her appearance. Instead, she turned her focus to school work, resulting in academic excellence.

But somewhere along the way, Rowsell discovered a interest in cycling. Recruited out of high school, she poured that same focus and attention she had for her studies into cycling. Quickly, she began winning high level competitions, vaulting her to super star status in the cycling world.

As her fame and success in cycling grew, so did her confidence. Rowsell credits her alopecia condition as being the lynch pin into her success as a world class cyclist.

“I cannot imagine my life if I had not had alopecia…it scars me to think I would have not found cycling.” Rowsell has become somewhat of a poster girl and inspiration for alopecia sufferers. While she does wear various wigs for “fun” and to feel “attractive on nights out,” she often will appear on the winners podium sans wig. If one was to Google search Rowsell, more often than not, one would see her bald head uncovered, sporting nothing but a charming smile and sparkling gold medal.

Over the years, and after numerous first place finishes and championships won, Rowsell has learn to take her condition in stride despite several set backs (several times her hair had grown back only to fall out again only a few months later). In a 2012 interview, Rowsell said, “Much worse things happen in life than losing your hair. I am happy and healthy. Now I want to focus on the things that matter – like getting that gold medal at the Olympics.”

Six months after that interview, Rowsell would go on to bring home the gold, on her home turf of London, England in the 2012 Olympics, defeating the United States.