Is Prince Harry losing his hair? 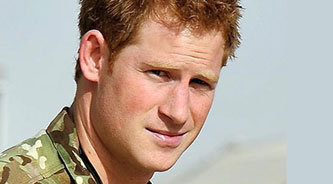 According to leading experts in the field of hair loss and baldness, Prince Harry may be losing his hair and could be bald by the time he reaches 40 years old. 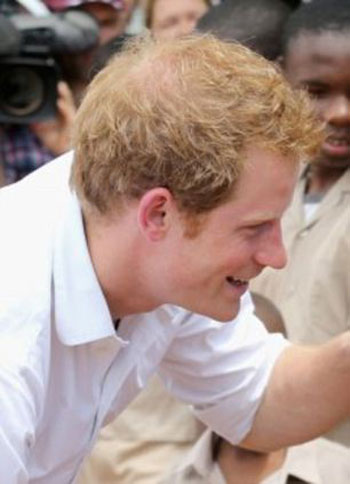 Recently the Royal Prince was photographed during a charity visit to the Kananelo Centre to increase exposure of his charity.

According to leading experts, including hair loss expert Asim Shahmalak; he was showing clear evidence of his scalp showing through his famous ginger locks, which could be an indication that Harry is experiencing the early symptoms of male pattern baldness.

Asim went on to discuss the potential psychological impact that balding can have on young men.

The UK leading hair loss expert stated “Hair loss can have a devastating impact on a young men like Harry, It can shatter their confidence and lead to significant loss of self-esteem”.

“Their options in covering up their baldness are limited. It would be difficult for Prince William, for instance, to shave his head, which is what a lot of men do to hide their baldness. A royal with a crew cut just doesn’t seem right somehow.”

It is well documented that his older brother, Prince William, began losing his hair from his early 20s and by the time he was aged 25 William was noticeably bald.

The handsome young Prince Harry is often seen to publicly poke fun at the receding hairline of his older brother and was quoted as saying William was “already bald aged 12”. It now appears that Harry may soon be on the receiving end of the bald jokes, most likely to the amusement of his older brother.

It is thought that although the Harry may not actually go completely bald, and the outlook is better for him than it is for his brother. It is likely that he will have a “significant bald patch,” by the time he reaches the age of 40, according to Dr. Shahmack. William will most likely have a “completely bald” head by the time he reaches the same age.

According to Dr. Shahmack, the out look still remains pretty rosy for Prince Harry, despite the potentially devastating news. Treatments are available for baldness and hair loss and he stated that if Harry was to have a hair transplant he could be a pioneer and lead the way for many other male sufferers of alopecia to do the same. 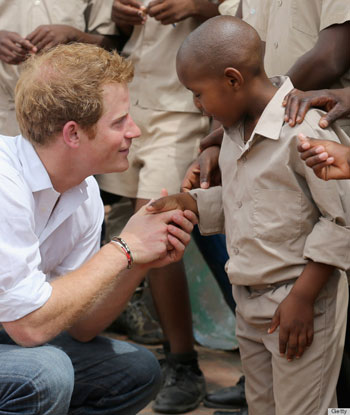 Dr Shahmalak said “The only long-term solution is a hair transplant – where hair is moved from the back or sides of the scalp to bald areas such as the crown, the stigma around seeking treatment has been removed. It would send out a great signal to other men if a royal would also seek treatment.”

Another solution which has been suggested would be to use Minoxidil. The drug is currently only available over the counter and is currently not prescribed by the NHS. Minoxidil comes in many forms such as drops and ointments and can even be taken orally. The most likely option for the Prince would be the use of a Minoxidil mousse, which could be applied to thinning areas of the scalp.

The drug has been widely promoted in the press and has proven successful when trialed by many sufferers of hair loss. In some cases the use of the drug has not only slowed down hair loss, but has also promoted fresh hair growth in areas where the sufferer was already going or had already gone bald.

Prince Charles, the farther of the two young Princes’ also suffers from baldness and it appears that the two have inherited their father’s baldness gene.

Although the news is probably going to have a slight impact on Harry, suffering from a balding head is very unlikely to knock the confidence of the charismatic and charming young Prince.

The Prince is likely to continue to gain masses of female attention as young ladies compete for his affection and he will most likely remain on the international most eligible bachelors list. The baldness gene doesn’t seem to have affected his older brother and his farther, both seem to remain a hit with the ladies despite the distinct lack of hair and the chances are it will be the same for Harry.

Harry who has made stated that he is to return to the USA in May, has sent his army of American “groupies” to a frenzy with the announcement of the visit, his first to the States since last years Las Vegas “incident”, which saw him playing a game of strip billiards, whilst he was under the influence of alcohol.

Following the incident the princes confessed “I let myself down, I let my family down and let other people down.

No doubt his next trip to the states will take his mind off all of the talk about his impending inherited baldness.