Is American Entertainer Seth Macfarlane Beginning To Lose His Hair? 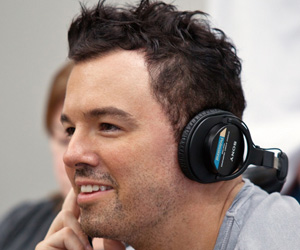 American funny man Seth Macfarlane’s hair loss is no laughing matter. Well, depending on who you are perhaps it may be. Some are huge fans of the talented comedy writer/actor/producer/cartoonist/voice actor/show runner who is famously known for such shows as Family Guy, American Dad, and hit movie Ted; then are those who were on the receiving end of Macfarlane’s infamous Academy Awards hosting gig, where he made most of the room the butt of his jokes. How is this is any different from what British comedian/actor Ricky Gervais did at the Golden Globes? For starters, Gervais got invited back…two more times. So needless to say, there may be few people in Hollywood that may get a chuckle out of seeing the photos below.
Stress as a major contributing factor and accelerator of male pattern baldness has been discussed several times here before. One can’t help but speculate that a job that requires such attention to detail, input, fast thinking, and demands a such a quick turnaround on content would certainly make a person’s life more stressful. Being responsible for filming locations, rewrites, casting, overall production in addition to answering questions from everyone and anyone attached to the project (or the projects in the works to begin as soon as the present one(s) wrap) would certainly raise the stress levels on anyone. And all that is just for one movie! That’s not including the duties required for everything else he’s working on.
But less about Macfarlane’s busy Hollywood life and more about his hair, or lack thereof.
Being in the public eye has it advantages for us when playing the “has he/hasn’t he” game because there are a plethora of photos to choose from and see the degree of hair loss evolve over time.
The photos below show Macfarlane early in his career and then a more recent photo. Notice the ‘improvement’. It’s photos like these that create the suspicion that Macfarlane underwent some sort of hair transplant procedure. And for a guy rumored to have a net worth of over a $100M, money would be no issue when it comes to getting the best money can buy.

But the photo below shows Macfarlane on the set of Ted 2 (set to open this summer) and it’s easy to see that the receded hairline is still there and there’s some thinning along side the temples.

The photos would suggest to us that rather than a hair transplant Macfarlane instead uses some sort of concealer/thickening spray or powder when on the red carpet or hosting. The fuller, darker appearance in Macfarlane’s hair during his Academy Awards would suggest some sort of temporary fix.
But for now, it looks like Macfarlane is too focused on other things to worry about address his hair loss. Perhaps he’ll use it for creative fuel.