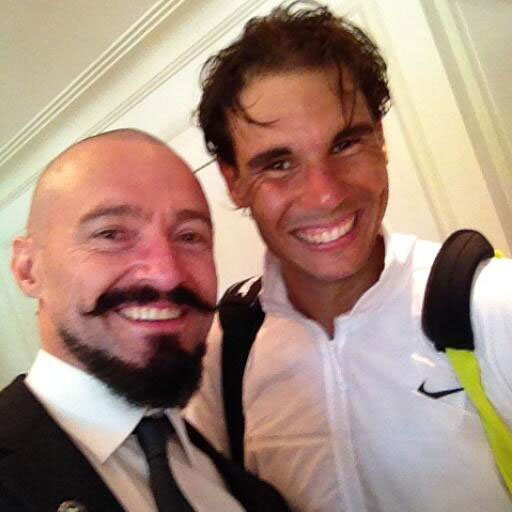 While the tennis is of course the primary focus of the annual Wimbledon pilgrimage this year, one thing that is sure to get people talking is Hugh Jackman and the new shaven hairstyle and huge moustache he’s now sporting.

Here are a few snaps from his visit: 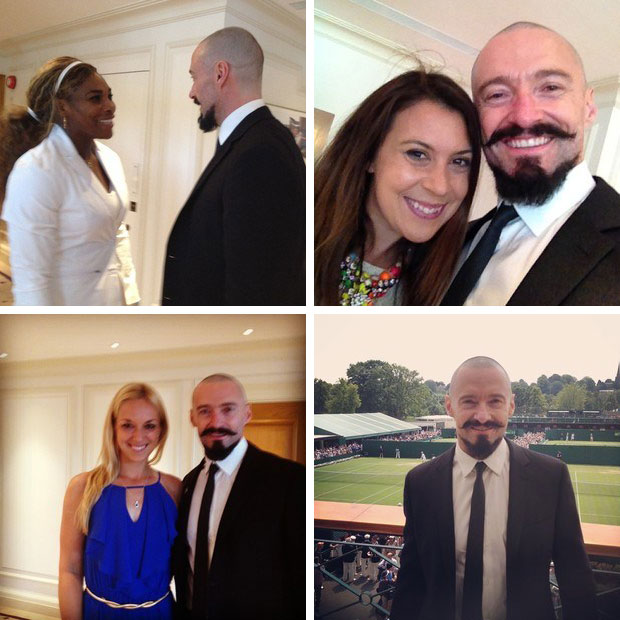 Documenting his visit to the London borough using his Twitter account, Hugh Jackman took the opportunity to meet a number of familiar faces including Rafael Nadal, Serena Williams, Bartoli Mariona and Sabine Lisicki. Needless to say, Hugh was welcomed with open arms and judging from the photographs, it is difficult to say who was more starstruck, Hugh or the sportsmen and women he dropped in on.

So what about that new look?

Well, its a massive change that’s for sure. Here is another snap (left) taken of the Hollywood A-lister alongside tennis champ Rafael Nadal, and a photograph of what he used to look like with hair.

Bizarrely, Rafael looks more like how he used to look than he does now. The combination of that shaven do and giant tash add up to a completely new look for Hugh.

Does it suit him?

Lets reserve judgment about his moustache for now, and focus on his hair. It is true to say that there has been a fair amount of speculation in recent years about whether or not Hugh is losing his hair, and what action he may have taken to remedy the situation.

This article shows Hugh in character to play Jean Valjean in hit film Les Miserables, with a suspicious looking scar on the back of his head. No doubt he would claim it was part of his character, but it caused many people to point towards a possible hair transplant procedure. It is also possible that he’s been using hair systems, as speculated here and here.

It is possible that he’s finally decided to dispense with the cover-ups and just shave his head, and if this is the case, best of luck to him. It does raise questions of how good a candidate he would make for a scalp micropigmentation treatment, because if he finds this new shaven hairstyle is one he can live with in the long term, it may be worth serious consideration. It wouldn’t affect his career at all because if he was cast in a role that required him to have hair, he could just wear a system or wig just like many Hollywood actors and actresses do.

If Hugh Jackman comes knocking at the door of our Los Angeles clinic (or possibly Harley Street given his current location), we’ll let you know 🙂