Hair Loss Is A Touchy Subject For Bruce Willis

It’s not easy being Bruce Willis. Critics take delight in ripping your films to shreds. The paparazzi seem to be on your trail night and day waiting for you to do something sensational. People can’t seem to learn enough about your private life. You want to do great character roles but fans keep asking when you’ll do Die Hard 4.

You’ve found it necessary to team up with rapper Mos Def to attract audiences to your latest film, 16 Blocks because you failed to get them in when you went solo for Hostage. Instead of asking about character motivation, interviewers want to know what motivates you to wear a hairpiece or go bald for a film. 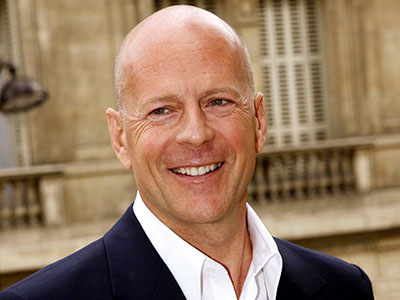 Those $22-million-a-flick paydays are well in the past. You turned 50 last year. Hair pieces are a hairy subject with Willis as he sports one as Jack Mosley in 16 Blocks. Mosley is a New York City cop assigned to escort small time career criminal Eddie Bunker 16 blocks from the jail to the courthouse for a hearing. What Mosley doesn’t know is that Bunker is supposed to rat on several corrupt cops in Mosley’s division.

“I looked at that thinning hair thing Richard Wenk, who wrote 16 Blocks, had going and I liked it. I thought it made a statement. I thought I could use the look for Mosley,” says Willis.

But wait. He’s not finished by a long shot. The question has obviously hit a nerve. “I’ve seen all those little digs where they try to make you feel less of a man because you’re losing your hair. I’m a man and I will kick anyone’s butt who tries to tell me I’m not a man because my hair is thinning, and I like fooling around with looking different ways. I wear makeup in films. I wear hairpieces in films. I don’t wear either in real life. End of subject.”

Willis gets humble for a moment when he admits “it’s hard to stick around in this business. I always thought my best work would come in the years between 40 and 60 if I was fortunate enough to hang around.”

Try to hint Willis may be lucky career wise, but not in love. His former wife Demi Moore married Ashton Kutcher, 22 years his junior. Willis was at the wedding. Willis has been seen with Moore, Kutcher and Willis’ three daughters.

“Demi and I actually get a lot of compliments on how we have handled the divorce and the raising of our daughters. An actor friend of mine who stayed at the same resort all of us were at over the Christmas holidays took it one step farther. He saw me, Demi, Ashton and the girls eating dinner. He called it evolution. That was a great compliment. I’ll take the credit for living in a way that’s best for my children.”

Willis says he owes it to his daughters to be there for them because “having those girls changed my life for the best. “Before I had my children, I was always just thinking about myself. It was just all me. It was just my world. When I had my first daughter (Rumor)who is now a young woman suddenly everything else but her seemed stupid. From that first moment I have loved being a dad and loved it more with each new daughter. I’m prouder of being a dad than of any film I’ve ever done.”