We’re not saying that Declan Donnelly has definitely had a hair transplant, however we believe it is a strong possibility.

The Declan Donnelly hair transplant rumours have been around for some time now, with no clear conclusion drawn either way. Dec’s silence on the subject only serves to aggravate the rumours, and many examples of ‘before’ and ‘after’ photographs seem to support the theory.

Pundits have claimed that both Ant and Dec are losing their hair, but a source alleged that Donnelly may have had some form of treatment to preserve his mane.

A TV insider recently told the News of the World that they were surprised by Dec’s hair-raising talent.

They said: “For the past few years Dec and partner-in-crime Ant McPartlin have had ever-rising hairlines, and been unable to disguise it. But whereas Ant seems happy to grow older gracefully, Dec’s hair seems to have regrown.” 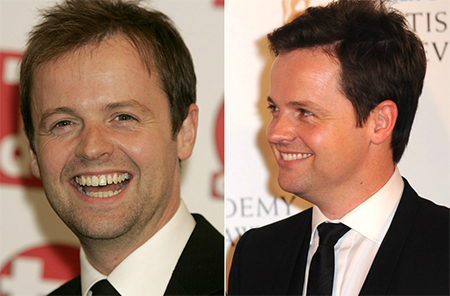