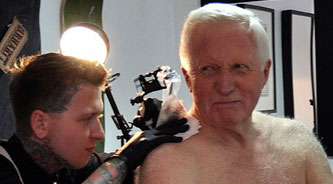 Seventy five year old BBC presenters may not be the most obvious candidates for tattoos, but David Dimbleby has defied convention and had a scorpion inked onto his right shoulder

The Question Time presenter revealed he has had a “modest sized” tattoo worked into his shoulder, apparently symbolic of his Scorpio star sign. Rumours that the tattoo is somehow a symbol of homosexuality or of a sexually transmitted infection are entirely untrue, whatever you may have read elsewhere.

Dimbleby decided to get the permanent body marking after exploring tattoo artistry as part of his latest programme, Britain and the Sea. The commentator, who has been been presenting the BBC’s general election coverage since 1979, was offered an inking while investigating how tattoos were introduced to the UK as a result of Captain Cook’s South Seas adventures. 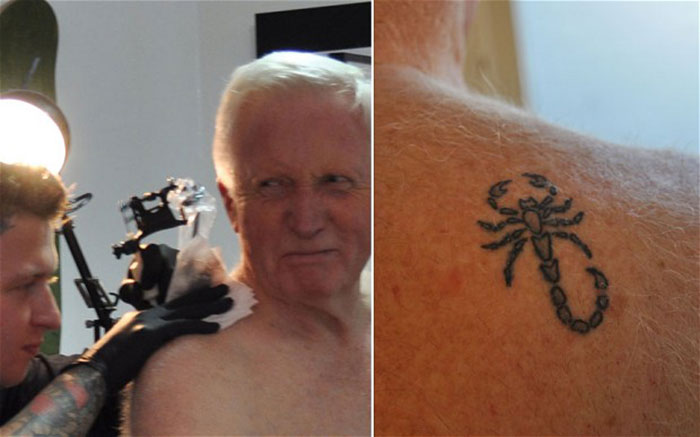 Originally thinking he was too old, Dimbleby declined, accepting a body marking in black pencil instead. Second thoughts made him push ahead. “When I saw it in a preview of the film I thought, ‘That’s a bit feeble.’ I thought it was wimpish having it just drawn on and I needed to man up,” he said.

On David Dimbleby’s shoulder we can glimpse the future. Fifty years from now, the sight of an old man with a tattoo will be no novelty. Indeed, rare will be the Briton over the age of 70 whose skin is unmarked by ink. That’s not because David is about to start a new trend for body art among senior citizens. That’s because tomorrow’s old are today’s young, and they are already covered in ink.

In the future, the spider on the neck or the angel wings on the back will be associated with grandparents. Words on the body, etched in curly script, will be seen most often on wrinkled or sagging skin. The inked “sleeve” will be as identifiable a mark of old age as the walking stick is now. By then, you’d guess that the association with older people will have killed off the tattoo among the young once and for all.

It is not only tattoos that mature gentlemen are turning to in a bid to appear more youthful. We are seeing an increasing number of people using Scalp Micropigmentation to recreate lost hair, who are aged in their fifties, sixties and seventies. Once believed to be a treatment aimed primarily at the young, a broader spectrum of clients than ever before are undergoing successful SMP treatments at HIS Hair Clinic.

Colin is one such client, aged 55 when he had his treatment. Find out more about Colin in the following video: