He is the award-winning celebrity hair stylist that has just returned from Krakow, where he was trimming the tresses of the England football team. 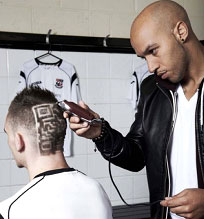 Daniel Johnson is the guy Wayne Rooney, Jermain Defoe and Ashley Young – to name a few – regard as the best in the business.

The heat and humidity in Poland and Ukraine were set to hold England back, but some hot, in-house haircuts have kept the squad cool.

England Striker Danny Welbeck told the FA: “The heat will take it out of you. “We had a barber come in and set up in Ashley Young’s room, so there were quiet a few staff and players involved.”

And that barber is Daniel who is renowned for pushing the boundaries and keeping footballers ahead of the game.

And it looks like his work is having great affects on the England team, after their 1-1 draw with France on Monday.

Spending the majority of his time making other guys look good, Daniel has chosen an easy yet slick style for himself. Last year, he opted for MHT®, with HIS Hair Clinic. Daniel refers to HIS Hair Clinic as ‘the world’s leading innovators in scalp pigmentation’. 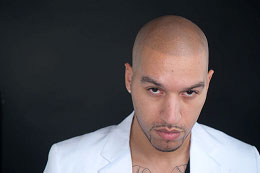 He said: “I was absolutely blown away by the procedure itself and by my results. HIS has absolutely perfected MHT®, which is why I knew I was in safe hands when I had my treatment.”

“HIS Hair has given me a buzzed, sharp style that’s easy to maintain and makes me feel good.”

“I was slightly conscious of where I was starting to go bald but I mostly had this treatment as part of my grooming routine.”