An introduction to My New Hair by Trevor Sorbie 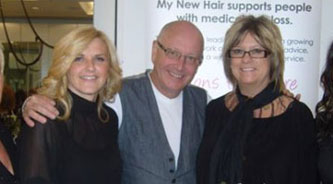 Set up by celebrity hairdresser Trevor Sorbie, My New Hair supports independent hair salons that provide a wig styling service for those suffering with cancer-related hair loss. My New Hair was set up with an understanding of the problems, issues and anxieties that people when suffering from the effects of cancer treatment. 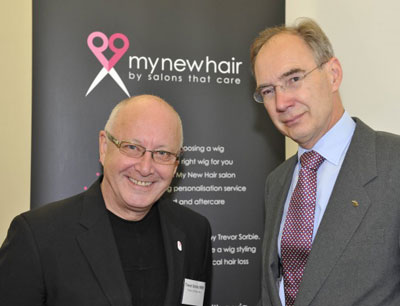 Trevor started the charity after he became involved in helping his sister in law create a wig that looked like real hair as she was battling against bone cancer.

Since he began work on the charity, Trevor has given up his own salon work and now works full time on My New Hair. Trevor has since been involved in writing a national NHS policy for wigs since a visit to 10 downing street and recently met with MP’s and attended a parliamentary briefing in which he convinced 25 MP’s to lobby for better wig services for the NHS.

The concept behind the charity is to train salons and hairdressers to be able to trim and cut wigs in such a way that they look like real hair and as such it allows sufferers of cancer, who may have lost their hair through chemotherapy and other treatments, to feel much like their normal selves again.

The charity trains the hairdressers through a series of seminars and advanced skills sessions and Sorbie even allows the would be wig stylists to come and shadow him at one of his own salons as he works on customising wigs.
There is a charge for the hairdresser to come and learn from Trevor and become skilled in the art of wig styling and all of the money made from the seminars and sessions is paid directly into the charity.

The charity does not just work with sufferers of cancer, they also work with people who are suffering from alopecia, and in fact anyone that has suffered from medical hair loss as the anxieties faced by someone who has lost their hair from medical hair loss, are very much the same as those faced by those suffering from the effects of cancer treatment. The long term goal of the charity is to have a national network of salons and hairdressers, trained to the high standards of My New Hair and in the longer term to scale the charity up and branch out to an international level.

The My New Hair website makes it straight forward for anyone who is suffering from chemotherapy or medical related hair loss to find the closest salon or hairdresser that has been trained by Trevor through their recommended salons section. They are all people that the charity has worked with whilst under the watchful eye of Trevor, ensuing that they get the best in expert advice and styling, to make the wig look as real and as individual as the person who needs it. The website also provides a 24 hour information service and has many links that can point you in the right direction if you have any questions or concerns.

Notably, Trevor has been joined by a number of well known industry names in his quest to ensure that people get the wig that they are looking for. Andrew Collinge, Guy Kremer and Jon Chapman are to name but a few, and all have agreed to offer clients advice on which wigs to purchase and on styling them.

Trevor’s background in wig styling began when he was at high profile video shoots and shows. Because of this he has had dealings with many wig suppliers and has the opportunity to identify the perfect wig supplier and his current choice is Trendco. Trevor stated, “There are hundreds of wigs to choose from with Trendco and they have suppliers all over the UK. They can normally deliver the next day by mail and the quality is first class.”

As more and more hairdressers pledge their time and support to the charity, Trevor will commit more of his time supporting people suffering from hair loss and help them to feel better about wearing wigs.

“Giving women back their hair – hair that looks natural, attractive and feminine gives them back a little of the confidence to face the world in their darkest hour. It was my personal experience of helping a family member during cancer treatment that inspired the idea of my new hair.”

The charity also raises money by committing to a number of events; one that is most definitely of note is the Big Wiggle. The big wiggle is a great way of showing support to the charity, by organising a wiggle event. The website even has posters, banners, leaflets and sponsor forms that an organiser can download if they wish to host their own “wiggle” event. My New Hair also supports other events, from a simple bake sale to charity galas, all in the name of raising money for the charity.

Following his work setting up My New Hair, on the evening of the 23rd April Trevor was awarded the HABB Humanitarian Award for his fantastic work founding my new hair, and helping women all over the country suffering from medical hair loss.

Trevor has had an amazing career and is the only person to have won British Hairdresser of the year four times, however he still says that my new hair is the most worthwhile thing he has ever done.

Previous Post
Is Rob Kardashian losing the fight against hair loss?
Next Post
All about the Little Princess Trust