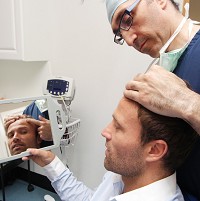 Tens of thousands of people from across the globe tuned in to watch ex-England footballer Michael Gray take part in the UK’s first live broadcast of a hair transplant.

Some 22,000 people watched the seven-hour operation, thought to be the first of its kind to be streamed live in the UK.

Gray, 37, who played for premiership teams including Sunderland, Blackburn Rovers and Sheffield Wednesday during his career, took part in a real-time question and answer session as well as tweeting through his surgery.

Hair loss and hair transplant expert Dr Bessam Farjo, who performed the operation, also answered questions as he carried out the lengthy procedure.

It started at 10am and was hosted by Herald and Times journalist Brian Beacom – author of Diary of a Hair Transplant: A Journalist’s Search for David Cassidy Hair.

Viewers watched as Dr Farjo took hairs from the back of Gray’s head, re-implanting around 5,000 hairs at the front where his hairline had been receding.

Both surgeon and patient fielded hundreds of questions from men considering the procedure, with topics ranging from its cost to the sensation of having the hairs implanted.

“I’m really happy with the way things have gone today and to have been part of this landmark project,” Gray said. “I never expected 22,000 would be watching me have a hair transplant, but hopefully it’s given anyone else who is considering the surgery some insight into how it all works.”

The Talksport pundit previously said he hoped the operation would give him more confidence. He can expect new hairs to start growing in around three months, with the full extent of new growth showing between eight and 14 months.

Dr Farjo, who is medical director of the Institute of Trichologists, added: “Michael was a fantastic patient and coped extremely well in what was certainly a very unusual day for him, and us.”

Previous Post
Cold Cap helps Tucsonian keep her hair during her chemotherapy cancer treatment
Next Post
What is the Micro Hair Technique?