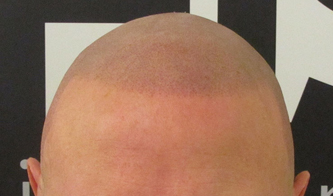 Richard started to lose his hair in his mid 20’s. He wore a hair system for 4 years but found maintenance to be too much hassle.

In 2001, Richard removed his hair system and had a 1500 graft hair transplant. Unfortunately his transplant procedure wasn’t very successful, so he shaved his head and tried to accept his hair loss and live with it.

Richard found out about HIS when he saw Paul Clark, one of our practitioners, on the Frank Skinner show talking about scalp pigmentation techniques. Richard came to HIS for a full head treatment and to conceal the strip scar he’d acquired as a result of his transplant surgery.

Richard is an active member of our forum, known as Baldandnotproud. You can read his personal account here.

In Richards own words – “It was the best decision I ever made. HIS staff are awesome and I can’t thank them enough”.